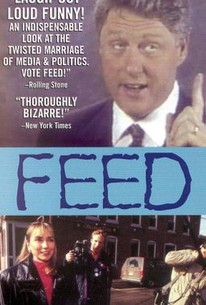 This video is a documentary of the 1992 party nomination contests and the Presidential race. Taken from satellite feeds, it contains candid, off the air, shots of the candidates and gives a little insight into the election process. Centering on the New Hampshire primary the film includes politicians Bob Kerrey, Jerry Brown, Bill Clinton and Hillary Clinton, Ross Perot, Paul Tsongas, George Bush, and Sam Donaldson.

This is a 76-minute movie with about 30 minutes of really interesting stuff. The rest is filler, or not so compelling.

There are no featured reviews for Feed at this time.