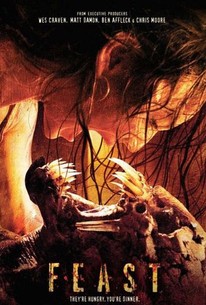 Critics Consensus: Director Gulager makes the most of what he's given; the resulting Feast offers up some surprisingly tasty -- if far from nourishing -- morsels.

Critics Consensus: Director Gulager makes the most of what he's given; the resulting Feast offers up some surprisingly tasty -- if far from nourishing -- morsels.

Critic Consensus: Director Gulager makes the most of what he's given; the resulting Feast offers up some surprisingly tasty -- if far from nourishing -- morsels.

One evening at a rural bar, a motley bunch of patrons struggle to survive a ravenous family of flying beasts bent on eating all of them.

It works as a funny and slicker-than-expected parody of the genre.

The first two "Project Greenlight" films got only brief local runs. Feast isn't likely to do much better.

When monsters attack, the camera gets all jerky, creating the horror effect known as motion sickness.

Who knows what might have happened if he had the time and the leverage to smooth out the rough edges, but material this junky can only be salvaged for so much scrap.

While the reality television series that chronicled the making of this low-budget horror film last year was extremely entertaining, the piece of cinema that resulted is kind of a bore.

[Director John Gulager] shows a little flair for the genre, though the editing is so frenetic you really can't see what's going on (a blessing, considering how cheesy the monsters look and move).

You dig on gore, creatures, jokes and being entertained? Feast on Feast baby!

While it doesn't advance the monster movie genre into new territory, it has fun exploiting and subverting the genre's conventions and the audience's expectation.

A refreshingly arch sense of humor coupled with some non-standardization, genre-wise, elevate this gloppy creature feature.

A satisfying roll in the horror sack, and I flipped for it...

amidst all the gleeful profanity, gross character stereotyping, outrageous interspecies rape and gory grotesquery, an apparent lack of originality is the one thing that should not cause undue offence here.

Feast is too knowing and in its own way, too high profile to be born as cult cinema. But it's a reasonable facsimile and as such deserves a look from the genre connoisseur.

Doesn't pretend to be original, far from it, this is your basic group of random survivors holed up and fighting off some nasty monsters with little weaponry. One by one people go down as the creatures rip them apart, no one knows where they are from or what they are, its a very simple premise but always effective. This isn't as good as I thought it would be as the creatures do look ferocious enough in the face but when seen from head to toe they do look rubbery and obviously a man in a suit. Of course you don't see them much as the camera work is fast n furious when the action kicks in and this is actually one problem with the film, the action cuts and moves very fast and its hard to follow and know who's been killed. There is a good sense of being uneasy as you watch the film though as you genuinely don't have a clear idea of who will survive from one minute to the next, there are a few 'Ellen Ripley' wannabes but not even they are guaranteed to make it. Plenty of gore and body parts and the always amusing sight of a bunch of people facing mortal danger yet still intent on beating each other up and acting aggressively to one another to not help their precarious situation.

A film with a higher budget than it deserves, a lot of big influences came together to make this film including the production team of Matt Damon and Ben Affleck, the Weinstein Company, and the film had a cameo from a decent actor. Much of this was small time horror, hokey humor that tried not to be clichéd and ended up parody in the process. Everyone is usually right in the middle on this, because though it is slightly tired, lazy, and repetitive, it's also smart at times. It takes chances with its out of this world monsters, not broaching on origins, sense, even making these desert animals less menacing by showing their wants, needs, and disgusting glorification of sex and violence. Mainly, it's a film about survival in a small, enclosed space. It's about outsmarting entities that can't be studied, being strong when your circumstances leave you weak, and being the greater predator when you're obviously prey. There are far too many characters, most dead or dying far too fast, picked off because they exist. Each has their own unique flavor to add to the film, but their entire histories and futures are shown in the space of three minutes, and its just another element of parody. It's less terrifying than it is gorey, chopping off limbs, eyes, spattering blood into every orifice and on every character. The effects aren't too high tech, but the way they're set up is ingenious. Most of the film makes itself up of gore and impatient banter between the respective victims. It's paced correctly, but nothing new presents itself by the end. The dialogue is plain, and the characters end up weak and unsubstantial. Overall it's a good film to watch for the effects and ideas, but otherwise it's horror fodder.

John Gulager's Feast is one of the most kick ass horror monster flicks to come out in quite some time. First thing you have to realize with going into this film is the minimalistic story. Although the story is almost non-existent, it more than makes up for it with gross monster carnage. This film is mindless comedic horror at its best. The film is flawed, but will definitely entertain you if you're in the mood for something ridiculous. Feast has plenty of gore satisfy gore hounds, and though it has a simplistic story, this is a very engaging film that is never dull or boring. There are lots of good bits strewn across the film to make it memorable. This is the most original horror comedy that I've seen in quite some time. This film is simply put, crazy, off the wall and memorable. If you love low-budget monster flicks with plenty of gore, this film is for you. This is a must see for horror fans, and is a refreshing horror film in the genre, while big studios want to remake classic films. I personally think it's great to see something different in the genre. The film succeeds on many levels because of its simple, yet effective story. Also what really makes this film stand out is its unique sense of humor. This is a no nonsense film that delivers exactly what you'd expect from a monster film and more. Definitely a film that is excessive in every way, this film is loads of fun from start to finish. The gore is delivered in spade and the use of comedy is smartly done, the film is a must see for horror fans tired of the same old remakes