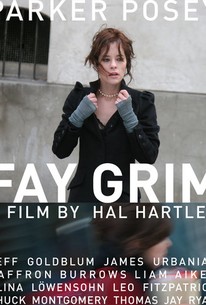 Critics Consensus: Fay Grim is too concerned with its own farcical premise to present a coherent, involving story.

Critics Consensus: Fay Grim is too concerned with its own farcical premise to present a coherent, involving story.

Critic Consensus: Fay Grim is too concerned with its own farcical premise to present a coherent, involving story.

A single mother from Queens becomes unwittingly embroiled in international espionage in director Hal Hartley's sequel to the critically acclaimed Henry Fool. Fay Grim (Parker Posey) is determined to raise her 14-year-old son, Ned (Liam Aiken), so he won't be like his father, Henry (Thomas Jay Ryan), who disappeared seven years ago after accidentally murdering a vicious neighbor. As Fay's brother, Simon (James Urbaniak), serves time in a prison cell for aiding Henry in his daring escape, he gradually begins to suspect that the man who inspired him to take up writing in the first place is not the louse he appeared to be, but instead the keeper of some potentially explosive government secrets that, if made public, could prove quite dangerous. As Simon begins to explore the possibility that Henry's autobiography, "Confessions," contains coded references to a wide variety of international atrocities committed by governments around the world, the CIA contacts Fay to inform her that her husband was killed in a hotel fire in Sweden shortly after fleeing America, and that the French government is currently in possession of two notebooks containing drafts of "Confessions." Convinced that the notebooks contain information that could endanger the security of the United States, CIA agent Fulbright (Jeff Goldblum) convinces Fay to travel to Paris and retrieve Henry's property before the information falls into the wrong hands. Now trapped in the middle of a cross-continental con and thrust deep into the world of international espionage, Fay is about to find out that her ex-husband is not only still alive, but in more trouble than he could ever imagine. ~ Jason Buchanan, Rovi

Hubert Mulzer
as Minister of Security

Korhan Onur
as Istanbul Cop in Streeet
View All

Fay's intercontinental quest for the missing, maybe dead Henry is also a search for his now fragmented writings, whose meaning is both constantly evolving and forever evaporating.

Movie sequels rarely work as well as literary serials, but the Henry and Fay movies have the ring of a satisfying trilogy in the making.

The involved backstory and Hartley's own generic music both prove burdensome; the main attraction is the cast's amusing way of handling Hartley's mannerist dialogue and conceits.

There's a thin line between goofing irreverently on the maddeningly convoluted nature of spy thrillers and actually being a muddled mess, and Fay Grim crosses it constantly during its deadly second hour.

Despite its imperfections, Fay Grim is worth seeing for Posey's and Goldblum's performances and particularly for the witty, literate dialogue.

Shows Hartley shrinking even as he goes global

Without a good quality story, all the eccentricity is just window dressing.

Hartley pretzels his faux spy plot into "Syriana"-like knots and ends up with a fascinating if somewhat flawed absurdist romp.

The nicest surprise of the movie is how long and how well Fay Grim works as a contemporary screwball comedy, a genre from which Hartley's diffuse yet severe sense of irony would seem to disbar him.

Cast: Parker Posey, Jeff Goldblum, Saffron Burrows, D.J. Mendel, Liam Aiken, Jasmin Tabatabai, Chuck Montgomery, James Urbaniak, John Keogh, Claudia Michelsen Director: Hal Hartley Summary: When it's discovered that her deceased ex-husband's manuscript contains information that could threaten national security and implicate the government in a variety of conspiracies, Fay Grim (Parker Posey) is forced to travel to Paris and retrieve the book before it falls into the wrong hands. A follow-up to the critically acclaimed Henry Fool, this puzzling thriller from Hal Hartley also stars Jeff Goldblum and Saffron Burrows. My Thoughts: "It's an offbeat kind of film full of some odd, quirky characters. The story is OK and interesting enough to keep you watching, but it just wasn't anything special. Parker Posey, is what kept me watching this movie. She does a really great job in this film. I enjoyed Jeff Goldblum, in this as well. Thought him and Parker were quite funny in this. The acting in this film is a bit over the top, which makes the film seem even more silly. But I think it was the directors intention to have some of the scenes to come off that way. In the end, it was just an OK flick with some funny moments. If your a fan of Parker Posey, I would say have a go at this film."

[font=Century Gothic]"Fay Grim" takes place seven years after Fay Grim's(Parker Posey) husband, Henry Fool, vanished after catching a flight to Sweden under an assumed name.(It's a long story, trust me. Or rather a long movie: "Henry Fool.") CIA Agents Fulbright(Jeff Goldblum) and Fogg(Leo Fitzpatrick) ask her if she has read any of Henry's journals which they believe could be a threat to national security. One notebook is in the possession of a publisher(Chuck Montgomery) who passes it along to Fay's brother Simon(James Urbaniak) who is in jail for helping Henry escape. Two more are in France and Fay agrees to retrieve them in exchange for Simon being released from prison, so he can home school her son, Ned(Liam Aiken), who has been expelled for a little underage fellatio...[/font] [font=Century Gothic][/font] [font=Century Gothic]Written and directed by Hal Hartley, "Fay Grim" is a convoluted mess of a movie with ill-defined characters. It's not that all of the necessary elements are not in place, just too many of them. To make matters worse, too much time and energy is given to trying to explain the MacGuffin. In the end, it is irrelevant whether the journals contain government secrets, the pornographic ravings of a madman or a great egg salad recipe. And whenever it feels like there is a coherent statement about the national security state on the horizon, the movie simply stumbles off into another brick wall.[/font]

I thought this film started out really strong, but as it went on it sort of got lost along the way. I thought the dialogue was great and I liked how the actors gave them their own spin on it. Parker Posey was fantastic in her role, and the supporting cast was really good as well. As I said the movie sort of lost it in the middle but in the end it picked up and it made for a good ending to a solid movie. Now I need to find Henry Fool.

[size=3]Fay Grim is a unique film, but it's ultimately not that engaging. I really wanted to love it, given that writer/ director [b]Hal Hartley[/b] is such an independent. But alas, it's only mildly enjoyable.[/size] [size=3][img]http://blogs.indiewire.com/twhalliii/fgPoster.jpg[/img][/size] [size=3]The film is a sequel to Hartley's earlier film Henry Fool, which I also saw and only moderately enjoyed. [b]Parker Posey[/b] plays Henry's wife. She has been abandoned by Henry, and she doesn't know what happened to him or where he went. [/size][size=3]She is contacted by the CIA, in the form of an agent played in deadpan comic fashion by Jeff Goldblum, and told that Henry was involved in espionage and may have been a traitor to the United States. To make a long story short, she ends up slipping off to Europe to find Henry and getting caught up in a set of interesting and funny double-crosses involving spies from about a dozen countries.[/size] [size=3]Fay knows next to nothing about politics. She barely knows where these countries are, much less what all the political intrigue is about. It is quite funny to watch her try to figure out what's going on and learn to do such things as talk in code. [/size][size=3]Imagine Lucille Ball joining the CIA: that's what it's like to watch Parker Posey play Fay Grim. But the comedy is never over the top or very screwball. Posey keeps it under control.[/size] [size=3]There's also a serious undercurrent to the film, which keeps the comedy in check. The audience is aware of the serious issues that are being talked about, even if Fay isn't. When the danger starts mounting, the film doesn't pull any punches. One of the delightful side characters is killed right before Fay's eyes, and there isn't a drop of humor in the scene. It's grim in a way that isn't the slightest bit ironic.[/size] [size=3]A slight literary element infuses the film, but not so much that you could call the film seriously literary. Fay's brother is an avant-garde poet, and there are jokes about publishing and the state of letters in America that are quite funny. But Hartley only sprinkles the film with a literary touch.[/size] [size=3]Despite a number of pleasant and intelligent elements and despite a very enjoyable performance from Parker Posey,, nothing in the film really sinks in very deeply. I forgot about the film about an hour after it was over. Nothing gets under your skin. Hartley just doesn't seem to take anything that seriously, and his comedy is rather mild. This film and this filmmaker represent a very minor footnote in cinema history.[/size]