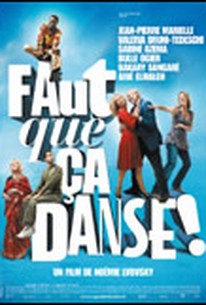 An elderly couple and their grown-up children must deal with the consequences of advancing age in this comedy-drama from France. Sarah (Valeria Bruni-Tedeschi) and her husband Francois (Arie Elmaleh) are a happy couple in their early forties who are facing with a dilemma not uncommon to folks their age -- what to do about Sarah's parents. While her mother Genevieve (Bulle Ogier) and father Solomon (Jean-Pierre Marielle) divorced when she was a teenager, they remain friends and see one another on a regular basis, while also staying close to their children. However, Genevieve has grown increasingly eccentric, and she's developed a bad habit of giving all her money to strangers, leaving her unable to pay her faithful servant Mr. Mootoosamy (Bakary Sangare). Holocaust survivor Solomon, meanwhile, is in sound body and mind beyond his fondness for tap dancing along with old movie musicals, but he can't understand why he can no longer get insurance just because he's eighty years old, though a new romance with college professor Violette (Sabine Azema) brightens his mood considerably. Faut Que Ca Danse! (aka Gotta Dance!) also stars Daniel Emilfork, Judith Chemla and Nicholas Maura; jazz great Artie Shepp provided the musical score. ~ Mark Deming, Rovi

There are no critic reviews yet for Faut que ça danse!. Keep checking Rotten Tomatoes for updates!

There are no featured reviews for Faut que ça danse! at this time.