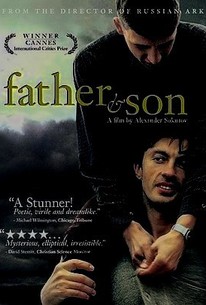 A father and son live together in a rooftop apartment. They have lived alone for years in their own private world, full of memories and daily rituals. Sometimes they seem like brothers; at other times, even like lovers. Following in his father's footsteps, Alexei attends military school. He likes sports, tends to be irresponsible and has problems with his girlfriend. She is jealous of Alexei's close relationship with his father. Despite knowing that all sons must one day live their own lives, Alexei is conflicted. Never has a love between a father and a son been so strong.

Alexander Rasbash
as The Neighbor

Critic Reviews for Father and Son

Although Father and Son is never as deep or wrenching as Mother and Son, the careful casting and Sokurov's unique visual style continue to make this a series worth following.

Here was my question for most of this movie: Wha-? I was clueless. Did not understand.

The film may be maddeningly obtuse, but its images are dazzling.

The best way to watch Father and Son is to let it wash over you and not be overly concerned with prosaic matters like plot.

Poised and teasing in a way that might incite less patient viewers to madness. But you don't come to Sokurov for his narrative agility, you come for his rhapsodic longueurs.

The opacity of the characters and situations prevents the film from having any true emotional impact.

Visually remarkable look at a gay relationship; one of the richest inside looks at gay love and tenderness.

Tediously mannered look at the obsessive intimate bonds between a father and his teen-aged military son.

for a hit of pure cinema, you could do no better...than to spend a few moments reveling in its high

This strikingly beautiful film from Alexander Sokurov (Russian Ark) captures relationships in an ethereal way that gets way under the skin.

A beautiful but static viewing experience that utterly fails to touch the viewer.

Audience Reviews for Father and Son

Huh. An interesting product from Sokurov. I'm actually beginning to wonder if I have seen any Russian films other than from Sokurov. Here we have a very interesting relationship between a father and son that seems to border on relationship territory. Throw in a girlfriend and things are really weird..particularly in those long looks.