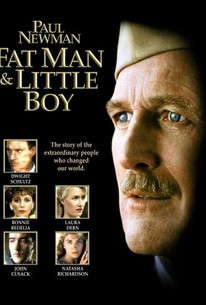 This historically-based film recounts the creation of the first atomic bomb and the people who played a vital role in its development during World War II. Revolving around the relationship between General Leslie Groves (Paul Newman), the military man in charge of the Manhattan Project, and scientist J. Robert Oppenheimer (Dwight Schultz), the story is marked with conflict and resolution as the two try to work together to reach a common goal.

Tom McFarlane
as Scientist
View All

[Fat Man] is not resoundingly disastrous. That would imply a certain energy.

Fat Man and Little Boy is a fiction based on the Manhattan Project, but it is thin and unfocused and hardly even suggests the enormous moral and practical questions that the scientists wrestled with in the New Mexico desert.

A boring film that fails to transcend from its basic idea, remaining as a story without too much tell about that small group, and how it affects their work to their respective personal lives. [Full review in Spanish]

Serious film about the ethics of the men who ushered America into the nuclear age.

An interesting historical drama, but lacks the personal touch.

Intersting, insightful histo-drama with Newman doing his job above and beyond what is called for.

A bit clinical, but also quite enlightening.

It's just too distanced to allow us to get involved.

The movie might actually have been good if it had been done with a little more pinnace.

Its an amateurish disaster.There is no focus and any serious moral posturing that could have been put worth is ruined by oversimplifying the questions and the answers.

Sheesh almost as dull as an Adams opera about the Manhattan project.