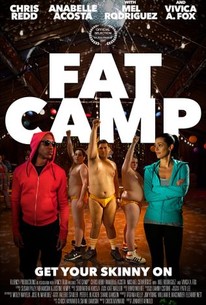 Twenty-something Hutch thinks image is everything. He fronts like a baller and is too spoiled to get a job. But when his mom kicks him out of the house and he's forced to work at his uncle's fat camp, he finds himself supervising an offbeat group of husky boys, who ultimately help him grow up. Chuck Hayward's irreverent script is all about embracing your inner loser as the ultimate winner, making Emmy-nominated Jennifer Arnold's fiction feature directorial debut a willfully offensive adult comedy with no manners and tons of heart. Acclaimed comic and actor Chris Redd (Pop Star: Never Stop Never Stopping, Netflix's Disjointed) gives a star turn as Hutch, supported by Anabelle Acosta (Quantico, Ballers), newcomer Michael Cienfuegos, Mel Rodriguez (Last Man on Eart, Getting On), and Vivica A. Fox (Empire, Kill Bill: Volumes 1 and 2).

Although formulaic in structure, Fat Camp is willfully offensive (in a good way), with [Jennifer] Arnold pushing the envelope to great result that strikes an effective balance of sweetness and laughter.

Fat Camp has good intentions, but its execution doesn't always live up to them. It's a pleasant enough escape from the bombast of blockbusters currently monopolizing cinemas.

...an "eh, maybe I'll go" experience that culminates in possibly not entirely regretting the time spent, but definitely wanting to move on.

There are no featured reviews for Fat Camp at this time.