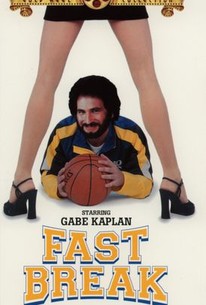 Hot on the heels of his Welcome Back Kotter success, Gabe Kaplan starred in this hastily assembled theatrical feature. Kaplan plays David Greene, the coach of a Nevada collegiate basketball team. Inasmuch as the local talent is pretty pathetic, Greene convinces a group of jive-talking New York street kids into playing for the college. Culture-clash jokes abound, with the black cast members usually coming out on top. In keeping with sports-comedy tradition, one of Greene's team members is a girl, and a very attractive one. Though it hasn't an original bone in its body, Fast Break is breezy entertainment, with a particularly thrilling climax.

Steve Conte
as Man on Bus

As do some of our most popular standup comedians, Mr. Kaplan sort of floats over his material, always in charge of it, but never deeply involved. This is not a rebuke.

We've seen this formula so many times before that there can be no surprises, except for some small suspense about when the foreordained events will take place.

Totally implausible (though surely not meant to be taken seriously), highly predictable, and not particularly funny.

A hugely likable basketball comedy. Gabe Kaplan is so appealing here that you wonder why he didn't become a bigger star.

There are no featured audience reviews yet. Click the link below to see what others say about Fast Break!