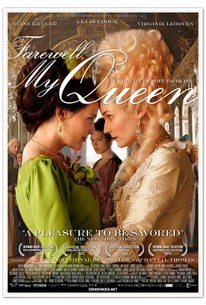 Farewell, My Queen marks the return of acclaimed director Benoît Jacquot and brilliantly captures the passions, debauchery, occasional glimpses of nobility and ultimately the chaos that engulfed the court of Marie Antoinette in the final days before the full-scale outbreak of the Revolution. Based on the best-selling novel by Chantal Thomas, the film stars Léa Seydoux as one of Marie's ladies-in-waiting, seemingly an innocent but quietly working her way into her mistress's special favors, until history tosses her fate onto a decidedly different path. With the action moving effortlessly from the gilded drawing rooms of the nobles to the back quarters of those who serve them, this is a period film at once accurate and sumptuous in its visual details and modern in its emotions. -- (C) Cohen

News & Interviews for Farewell, My Queen

View All Farewell, My Queen News

Critic Reviews for Farewell, My Queen

Jacquot has chosen wisely in casting Léa Seydoux in the key role of Sidonie, whose luminous but watchful eyes suggest a soul wise beyond her years.

"Farewell, My Queen" is a layer cake of royal pleasures, rote protocols and revolutionary politics. For skeptics who thought this story had grown stale, let them eat their words.

The details of the plot are unimportant: that is the main point made by the skillful director, Benoît Jacquot. It is the slowness with which they realize what is happening that fascinates.

Although it was shot at Versailles, and its actors are dressed to the 18th-century nines, Farewell, My Queen has a loose, reportorial intimacy about it.

The foreboding and chaos contrast neatly with the lavish costumes and sets.

We know what will happen, of course, but Jacquot still manages to create tension, as well as a semi-soap opera, among the let-them-cake-eaters of post-Enlightenment France.

A heady concoction of historical intrigue, with a tart hint of salaciousness that drains away the generally unrealistic nature of supposedly authentic reenactments.

Diane Kruger does a spectacular job as a flighty, self-indulgent Marie Antoinette.

It might be that Marie still waits for a true incarnation, but Jacquot's pushing her beyond likeability is refreshing.

"Farewell, My Queen," set in four days in 1789, takes place in the palace at Versailles, and the film carries an unusual sense of light and texture.

We share a palace insider's perspective as Marie-Antoinette lives her last days at Versailles, prior to her arrest and eventual appointment with "Madame Guillotine." It's. like Upstairs Downstairs at Versailles.

Audience Reviews for Farewell, My Queen

With many inelegant zooms and clumsy camera movements, this irregular drama also fails to develop Sidonie's devotion to the Queen, and so their trust relationship feels forced and rushed. Still, the story creates some good tension following a fictional character of uncertain fate.

Similar in a way to Sofia Coppola's Marie Antoinette. This film focuses more on the servants than the queen herself. The period details seemed more accurate. It is worth hearing the story in the French language. There is something melodic in the sound. The camera work often utilizes long uncut shots with the camera freely moving back and forth between people. It looks a bit nontraditional and while it didn't bother me, I'm not sure what it adds. I enjoyed the upstairs/downstairs nature of the drama. Lea Seydoux as Sidonie and her complicated relationship with Diane Kruger as Marie Antoinette is especially compelling. Lea plays a literate, creative, curious, and bold young woman, a character who generally needs to hide these qualities. The spoiled young queen is much more fragile and fickle than one might expect. It is about the chaos faced by those who had power, but even more so by those who served the people in power, when their way of life was crumbling around them.

If you are expecting a French film chronicling the last days of Marie Antoinette, then you may be in for a slight disappointment. Brilliantly directed by the Benoit Jacquot (who also co-wrote the much less impressive script) and starring Diane Kruger as Marie Antoinette and Lea Seydoux, who plays one of the Queen's readers named Sidonie Laborde, and is also the protagonist of this film (for some reason) "Farewell, My Queen" is advertised as the story of the last days of Marie Antoinette, but it's more like the somewhat muted story of the two months before the "last days" of Marie Antoinette. So, even though "Farewell, My Queen" is a better movie than Sofia Coppola's ill advised, indie rock inspired, "Marie Antoinette", due to the faux-final-days story structure, in conjunction with the fact that "Farewell, My Queen" uses Marie Antoinette as a side character, telling the story from the point of view of Sidonie Laborde (a nobody) this is a film which may have many audiences scratching their heads as to why the need to show this particular moment in the life of Marie Antoinette. As I alluded to above, "Farewell My Queen" chronicles a miniscule portion in time during the last months of Marie Antoinette's reign. However, audiences are not treated to "the good part", or the part they undoubtedly came to see. What I mean by this is there are almost no visuals of the actual Revolution, plus (and more importantly) we don't actually get to witness the final days of Marie Antoinette's life simply because "Farewell, My Queen" curiously plays out through the eyes of one of her ladies-in-waiting. Instead, audiences are forced to sit through a pseudo-love story that focuses not on the very interesting end of Marie Antoinette's reign, but on the minutiae right before it! This film is the equivalent of sitting through the love story of Jack and Rose, with the movie ending just before the Titanic strikes the iceberg. Yes, I am aware that this is a script which was adapted from a critically acclaimed novel by Chantal Thomas, BUT it still doesn't make the story's focus any less misguided. I mean, there are some scenes which do attempt to create a somewhat intriguing love story, an aspect which must be fully accredited to some fantastic mood setting by Jacquot, but in the same vein, this film never rises above said simplistic love story. Side Note: Another issue many audiences will likely come across is how frivolously "Farewell, My Queen" throws its viewers right into the deep end of this story, with little exposition. In fact, the greatest individual flaw which hinders "Farewell, My Queen" will be seen in the audiences immediate realization that neither Jacquot's visuals or the engaging performances (which I will speak about later) are going to give those not formally versed in the players of the French Revolution and the fall of Versailles, the background information they may desperately desire, as this film half-introduces more and more characters of seeming importance. So, do yourself a favor, if you are going to see "Farewell, My Queen" (at the very least) peruse the Marie Antoinette Wiki page before going to see this film. With that said, the visuals (the set design in conjunction with the director) are somewhat breathtaking at times, due to Jacquot making some very brave directorial choices, including tons of long takes which trail behind characters as they weave in and out of crowds, giving audiences an intimate feeling of the atmosphere of late 1700's France, and a few beautifully constructed shots of the landscapes. And I guess it doesn't hurt that the two female leads, Seydoux and Kruger, both give engaging performances. But even if Kruger's interpretation of Antoinette is one of the best I've ever seen and Seydoux is so captivating to watch as she effortlessly takes control of the movie every time she is on screen, there is simply not enough in the story or the writing to give reasoning to the eccentric behavior or motives behind the actions of Marie Antoinette or (more importantly) give a reason as to why Sidonie is so infatuated with her. So, even though, in the latter half of the film (more than an hour in) Jacquot does create an atmosphere which allows these characters to somewhat blossom, many will find it hard to care about a Marie Antoinette story that contains no beheadings. Final Thought: Based on a "last days" plot which attempts to imitate a much better film like "Downfall", even with some spectacular direction and two engaging female performances, "Farewell, My Queen" is nothing more than this year's "My Week With Marilyn", telling a story which focuses on characters nobody really cares about, rather than simply creating a storyline around the life/last days of (in this case) Marie Antoinette. So, even if you are a Marie Antoinette fan, with the overall structure the way it is, "Farewell, My Queen" is nothing more than DVD worthy at best. Follow me on Twitter @moviesmarkus Find more reviews at: movieswithmarkusonline.blogspot.com

"Farewell, My Queen" starts on July 14, 1789 in France where the quiche is about to hit the fan. That's in Paris. In Versailles, at court, events proceed normally. Even with the luxury of a clock, Sidonie(Lea Seydoux) is still late for her appointment to read to Marie Antoinette(Diane Kruger) who does not really mind, either way. Otherwise, Sidonie is employed for embroidery. On a personal note, she is teased relentlessly about her virginity, especially with the handsome Paolo(Vladimir Consigny) on the premises. She is not the only one, as the Duchess Gabrielle de Polignac(Virgnie Ledoyen) is herself the subject of her share of rumors. And then the news reaches them in the middle of the night... "Farewell, My Queen" is a briskly paced historical thriller that tells the beginnings of the fall of the House of Bourbon in France, as seen through they eyes of one servant girl. This point of view which used elsewhere before works especially well here in allowing the viewer to follow the story as the characters find out themselves, as aided by the natural lighting. As you can imagine, the movie is steeped in historical detail but not the usual fancy side, but a darker one, like rats. Since we know about the literal rats, how about the metaphorical rats? As dramatized, that's what the whole tragedy of the French royalty comes down to as they have never had to make a decision without others to do so for them before, and now have a huge one to make. With foresight being 20/20, we know the story of the Bastille and what comes next but here it is less certain and seems like it might be containable. So, what to do?