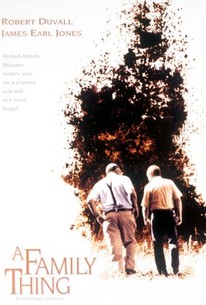 A middle-aged Southerner's world turns upside down after his mother's death when he learns that his real mother was the family's black maid and that he has a half-brother. After he finds his long-lost brother, most of the drama revolves around the difficult relationship between the two brothers.

David Spenser
as The Nightclub Band

Katherine Mitchell
as Woman in Apartment

Jacqueline Williams
as Woman at Hospital

Greg Hollimon
as Man No. 2

Critic Reviews for A Family Thing

As it is, it's a superior entertainment, warm-hearted and touching, and with some nice shadings in the performances.

It's likely to be overrated by some and underrated by others, and both contingents will be wrong. One can't, however, overrate the performances, with auntie ruling the roost in more ways than one.

Uplifting film that celebrates the ties that link people together despite vast differences.

Audience Reviews for A Family Thing