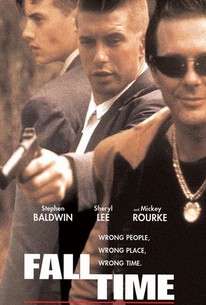 An innocent teenage prank goes horribly wrong in this crime drama which is set in a small Minnesota town during 1957. To celebrate their graduation, David, Joe, and Tim design an elaborate prank. They will drive up to the local bank in their Cadillac, shoot their friend with blanks, stuff him in the trunk, and take off. Unfortunately, at the time they are pulling the prank, a real robbery is in progress. The kids load the wrong body, Leon, a crook, into the trunk. The other robber, the evil, manipulative Florence, grabs Tim. The crooks torture the boys. They tell Tim he can be released if he successfully robs the bank. Instead he grabs Patty the bank clerk. They try to avoid Florence as they try to rescue David and Joe from Leon's cruelty.

A direct-to-cable indie bank heist drama starring Micky Rourke, in a tailor-made role as the kind of sleaze that's both menacing and hilarious.