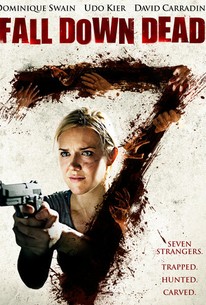 In a city swallowed up by darkness, a group of seven strangers are stalked by a serial killer seeking the one woman who can identify him to the authorities. The lights are out due to rolling blackouts, and most of the locals are cowering in their homes as a homicidal maniac dubbed the Picasso Killer stalks the streets. One night, in a darkened office building, seven strangers find themselves stalked from the shadows. The Picasso Killer is near, and the slaughter won't stop until Christie Wallace is dead. Christie knows the Picasso Killer's true identity, and is she wants to get out of this building alive, she's going to have to fight for her life. Udo Kier, Dominique Swain, and David Carradine star in a thriller from Suburban Nightmare director Jon Keeyes.

Critic Reviews for Fall Down Dead

We know we're going to see Olivia Wilde in her birthday suit - wintry weather be damned.

A complete and utter mess...

Each contrived twist and every routine turn makes the waiting game for the end credits to roll seem that much longer.

A negligible effort in almost every conceivable way, this film's belated micro-release by New Films International is really a glamorized four-wall effort in the Roger Corman tradition, prefacing what should be a very quick transition to DVD.

Another serial killer movie...and this one's so bad it reaffirms how often we take even mediocre pictures for granted.

Audience Reviews for Fall Down Dead

There are no featured audience reviews yet. Click the link below to see what others say about Fall Down Dead!