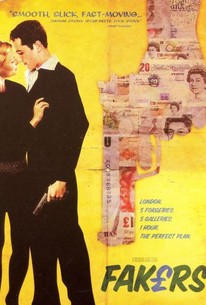 Saddled with a 50,000 which he has only four days to pay off before suffering grievous bodily harm, a petty London criminal attempts to carry out an ingenious art scam in director Richard Janes' spirited caper comedy. Nick Blake (Matthew Rhys) owes smooth-operating crime lord Foster Wright (Art Malik) a sizable dept, and if he doesn't cough up the cash in four days the situation promises to turn nasty. Desperate to find a means of raising the cash but unable to carry out the kind of heist that could get him out of his peculiar jam, Nick believes that he has found a solution to his problem when he discovers a lost sketch by revered Italian artist Antonio Fraccini. Nick's plan hits a hitch, however, when he discovers that the sketch is only worth 15,000. Now, with the clock ticking down and mere hours to go before Art sends his thugs out to collect, desperate Nick will enlist the aid of his cynical friend Eve and her talented artist brother Tony in forging the sketch and selling copies to five different Mayfair galleries in the short span of one hour. Should Tony and his partners in crime successfully execute their carefully planned ruse, the galleries won't even realize they've been swindled until it's too late. If the plan goes awry, on the other hand, Tony will be a wanted man on both sides of the law.

The scenario isn't entirely plausible, but the actors are engaging and you can't beat the running time.

All blag and no substance.

Fakers is pleasant, passable entertainment, even if it's all too lightweight.

just doesn't have enough pep or twists to maintain interest in the long run.

Such artless inattention to the con man's craft might be overlooked if any of the characters or performers had the personality to pull one over on us, the audience.

This idiotic crime comedy begins as a heated Sophia Petrillo flashback only to continue as a lobotomized Guy Ritchie caper.

With so many high standing peers (both contemporary and classic), it just doesn't have the muscle or the nous to make an impression.

There are no featured audience reviews yet. Click the link below to see what others say about Fakers!