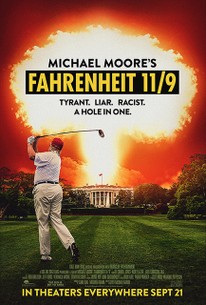 Critics Consensus: Fahrenheit 11/9 finds Michael Moore in fine fighting form, delivering a political call to action that ranks among his most effective works.

Critics Consensus: Fahrenheit 11/9 finds Michael Moore in fine fighting form, delivering a political call to action that ranks among his most effective works.

Critic Consensus: Fahrenheit 11/9 finds Michael Moore in fine fighting form, delivering a political call to action that ranks among his most effective works.

Michael Moore's "Fahrenheit 11/9" is a provocative and comedic look at the times in which we live. It will explore the two most important questions of the Trump Era: How the f**k did we get here, and how the f**k do we get out? It's the film to see before it's too late.

The House with a Clock in Its Walls Ticks Along Tolerably

The director's comparisons between Trump and Adolf Hitler are overblown, but it's useful to be reminded that demagogues and oligarchs do not, as he puts it, fall out of the sky.

In short, nothing Moore says should be taken as gospel - and yet his crass showmanship is in some ways an asset, especially when he approaches subjects that can hardly be discussed in decorous terms.

With Donald Trump in his sights, however, Fahrenheit 11/9...shows Moore reinvigorated and at his most potent, as a film-maker and a polemicist.

Much in Moore's analysis is very hard to disagree with, but this doesn't make it automatically valuable. Sharp points go astray, lost in the sloppy tirade.

It is ostensibly about Donald Trump's presidency ("How the f*** did this happen?!") but Moore's approach is wide-ranging and discursive.

Moore tells America to keep the faith, keep fighting the good fight. That message is just about discernible in the fog of pain.

It's one of Moore's best films in more than 10 years, and it's certainly one of his most hopeful.

Michael Moore returns to the self-mythologizing and fact fudging.

"Fahrenheit 11/9" is a serious and sobering work, full of verve and vitriol.

[Michael] Moore likes to use Guerrilla tactics as centerpieces of his narrative, and this film has a doozy. It's brilliant.

Another fine document of American life at an astonishingly strange point in its history. Sadly the film fails to answer its own questions, despite its most impressive and moving moments appearing to offer something of a solution.

The film is a multifaceted video essay, and many of the points [Moore] makes will shock viewers unfamiliar with the US political system, the country's deep social problems and its population demographics.

The broad strokes of the documentary are not wrong, but that's about all Moore has to offer here. He should have either lengthened this to a miniseries or made a more focused movie.

You may say that Moore digresses trying to talk about a good too many things, but the result is like a last chapter in a trilogy that began with Columbine and Fahrenheit 9/11, wrapping up its thesis in a devastating (and understandably desperate) wake-up cry to a country that is being burnt alive.