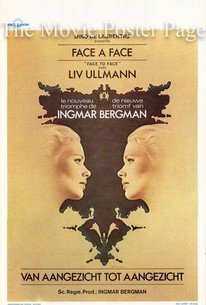 Liv Ullmann plays Dr. Jenny Isakson, a psychiatrist who is taking a vacation while her husband Dr. Erik Isakson (Sven Lindberg) is elsewhere. Haunted by visions of an old woman, Jenny suffers from profound, inexplicable depression. Desperately in search of a escape from her doldrums, she has an affair with married doctor Tomas Jacobi (Erland Josephson). This only serves to spark an attack of hysteria for Jenny. Again visited by hallucinations of the old woman, she attempts suicide. While hovering between life and death, she imagines she sees all the people who've been influential in her life, and rails against them for causing her neuroses. Only while recovering does she learn who the spectral old woman is and why she is undergoing so harrowing an emotional experience. Like his later Scenes From a Marriage, Bergman's Face to Face (Ansikte mot ansikte) originated as a multipart TV series, which was then pared down into a two-hour-plus feature film. ~ Hal Erickson, Rovi

Tore Segeicke
as The Lady

Bergman's most potent psychodrama from the cycle that began with Cries and Whispers and ended with Autumn Sonata.

Mr. Bergman is more mysterious, more haunting, more contradictory than ever, though the style of the film has never been more precise, clear, levelheaded.

This is a strange, stormy period for Ingmar Bergman.

Ingmar Bergman at his most painful, pretentious, and empty.

Bergman has put in the Freudian asides and fireworks for his own reasons but great director that he is, he hasn't in the process stood between Liv Ullmann and the camera.

Bergman can be credited for directing Ullman in what may be the performance of her career. I do not feel, however, that I saw a Bergman film. Rather, I felt I was watching a film that Ullman gave the master permission to put his name on.

Face to Face, [Ingmar Bergman and Liv Ullmann's] latest collaboration, is not only their most devastating but their most moving, their most profound, and their best. It is is a mind-blowing experience from beginning to end.

Bergman's self-confession, which is borderline narcissistic, sheds light on the deepest corners of the fear and tremors of our time period. [Full Review in Spanish]

Bergman stays close on [Ullmann's] face for long portions of this 136-minute movie, and she finds its key: she never acts crazy.

"Face to Face" falls short of the best Ingmar Bergman films, despite a harrowing, virtuosic performance from Liv Ullman. The plot is minimal, and has the unfortunate air of Bergman just laboring to contrive new ways to make a character miserable (this is not the first time I've had this reaction). Ullman is Jenny, a physician with a shaky background. Her mother was emotionally distant, and discouraged shows of affection. Both parents later died in a car crash. Her grandmother was domineering and abusive, and her grandfather is now entering a painful state of elderly helplessness. Her job is stressful, and involves dealing with mentally unstable patients. Jenny is married and has a daughter, but has affairs and has alienated her child. Her husband Erik routinely spends time away from home on business. It's an environment where people pretend nothing is wrong, but privately know better. This is a depressing situation, but the details don't seem extreme enough to motivate the dramatic breakdown which Jenny suffers. Instead, the scenario just seems like an excuse for Ullman to flash her formidable acting chops (particularly dazzling during a vivid scene where her character deliriously reenacts past arguments with her grandmother). Initially haunted by visions of a grim crone with an eerie black eyeball, Jenny eventually turns suicidal, incapacitated and hysterical. She has spent years as a successful doctor, but now suddenly collapses. There is a specific trigger but, again, this incident doesn't seem quite traumatic enough to derail such an accomplished woman. Originally made for television, "Face to Face" has some bold nightmare sequences (a burning coffin here, a mutilated face there), but the cinematography is rather ordinary by Sven Nykvist's usual high standards. And the score is practically non-existent -- the opening credits are backed with the sound of lapping water, and music is almost absent except for one onscreen classical performance and a few slammed piano notes. Still, the main flaw is more fundamental: Unlike with most Bergman scripts, there is room for only one great role. (Note: I hear there is a 136-minute cut of this film, but I am reviewing the 114-minute version.)

The Greeks were the first to understand it: the best dramatic performances are given by women because they have a way of letting out every emotion with the most compelling force. Bergman also understood this and I think his best movies are those that star women in tense dramatic situations: Persona, Cries and Whispers, Passion of Annam Through a Glass Darkly and Face to Face. The long and fruitful collaboration between Bergman and Liv Ulman is one of the greatest director-actor in movie history comparable with Fellini-Massina, Scorsese-De Niro and Welles-himself. Unlike other collaborations Bergman used Ulman in a variety of roles, always changing something substantial, never letting the viewer down. I knew Bergman can reach high intensity but I never guessed that he can go so far as he goes here. The story of a psychiatrist that thinks she has everything sorted out in her life but finds out that she has it worse than her patients really left me speechless. Bergman explored madness before in Hour of the Wolf; in that movie as in this one the viewer is confronted with the decision of what is real and what is in the imagination of the character making the cinematic journey thrilling and surprising

This is something on the big screen.