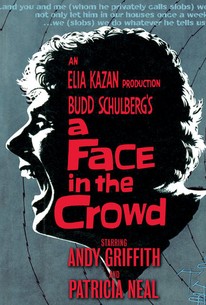 Critics Consensus: A raucous Andy Griffith channels the corruptive influence of celebrity in Elia Kazan's A Face in the Crowd, a prescient critique of American media.

Critic Consensus: A raucous Andy Griffith channels the corruptive influence of celebrity in Elia Kazan's A Face in the Crowd, a prescient critique of American media.

A Face in the Crowd Photos

In this drama, Andy Griffith makes a spectacular film debut as Lonesome Rhodes, a philosophical country-western singer discovered in a tanktown jail by television talent coordinator Patricia Neal and her assistant Walter Matthau. They decide that Rhodes is worthy of a TV guest spot and he becomes an overnight sensation.

Howard I. Smith
as J.B. Jeffries

Faye Emerson
as Herself

Betty Furness
as Herself

Virginia Graham
as Herself

Burl Ives
as Himself

John Cameron Swayze
as Himself

Mike Wallace
as Himself

Walter Winchell
as Himself

Critic Reviews for A Face in the Crowd

A Face in the Crowd has never ceased to be relevant.

What starts out as a seemingly liberal tract rapidly becomes a smug, cynical exercise in misanthropy.

This sizzling and cynical exposure... also presents Andy Griffith as the key figure in his first screen role.

Instead of implying their criticism of TV values through asserting their own, Kazan and Schulberg make a token gesture of protest, in which they have no faith.

Consider this [film] an essential one for these equally essential times.

Budd Schulberg has weakened his own short story by expanding it for the screen, and Elia Kazan's direction becomes far too hectic before the finish...

A Face in the Crowd (1957) is director Elia Kazan's satirical and powerful socio-political drama that illustrated how a jailed, down-home country boy in the late 1950s could be transformed overnight into a media celebrity on the radio, and later

Not until Robert Redford's Quiz Show had a movie so clearly illustrated the power of the idiot box -- in this case, its ability to mold the minds of susceptible Americans who will swallow anything that passes before their eyes.

a masterful, enthralling work of both disturbing prescience and in-the-moment acuity

Elia Kazan's A Face in the Crowd [is] a darker take on faux-populism that's somehow still not as dark as what's happening on our side of the screen.

Griffith's hungry, lunging performance is a shock and a revelation to anyone who knows him primarily from The Andy Griffith Show or, God knows, Matlock.

Audience Reviews for A Face in the Crowd

A drifter becomes a radio personality, becomes a television personality, becomes a national influence, all by cleverly telling people what they want to hear while playing a simpleton. It so closely hews to the current trump presidency that it counts as precognitive. Andy Griffith is a whirlwind force as the cheesy manipulator but Patricia Neal holds her own as the woman holding onto a lit firecracker (no pun intended). Lee Remick surprises by baton twirling.

This one is disturbing for all the right reasons. Watching Andy Griffith play a money-grubbing, amoral, unlikeable bastard is like watching Mister Rogers play Hannibal Lector. After all, this is the same Andy that kept the streets of Mayberry safe for all those years and the same Andy that taught Opie how to fish and throw a curve ball. It's even more unnerving because Griffith does it so well.

Holy central performance Andy Griffith! This movie is full on fantastic. Elia Kazan has brought to life a story that is years ahead of it's time. A must see.

I never thought I'd ever use the word amazing to describe any performance by Andy Griffith but I've got to hand it to the man -- he was amazing. He played a folksy and infinitely lovable hick and a power-drunk bastard with equal magnificence. Director Elia Kazan's initial shot at a burgeoning form of entertainment serves as an eons ahead of its time lightning rod that's more relevant now than ever. Kazan's direction is fantastic (especially when the spectacular Patricia Neal snaps in the sound booth) and the script is biting. The supporting cast (particularly Walter Matthau) was brilliant and I see yet another movie I want to kick myself in the ass for not seeing sooner. I loved this movie so much I want to freak out.

A Face in the Crowd Quotes