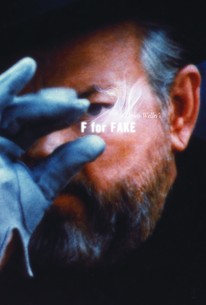 Orson Welles appears as himself in this witty and subversive film essay on fakery and forgery, art and illusion. Taking footage from an earlier Francois Reichenbach documentary on art forgery -- based on a book by the literary hoaxer Clifford Irving -- Welles worked his own clips into it, re-editing the original footage extensively. In the film, he tells of the success of his own fakeries, from the lies which got him into Ireland's Abby Theater, to his famous radio hoax about an invasion of Martians, and his subsequent career as an actor and film director. All of these memories are interspersed in a sort of documentary within a documentary about the art forger Elmyr de Hory -- a woman who conned Picasso out of almost two-dozen paintings -- and musings over the life of Howard Hughes and the man who forged an "autobiography" of Hughes, Clifford Irving. This 1973 production was the last full-length film Welles made.

Orson Welles
as Himself

Oja Kodar
as The Girl

News & Interviews for F for Fake

New on DVD & Blu-Ray: Snowpiercer, Mad Men, and More
Tom Cruise NOT to Star in "Watchmen"

View All F for Fake News

Critic Reviews for F for Fake

F For Fake is minor Welles, the master idly tuning his instrument while the concert seems never to start again. But it's engaging and fun, and it's astonishing how easily Welles spins a movie out of next to nothing.

The result is a curious, unsatisfactory pastiche of documentary tidbits acquired from Reichenbach and speculative filler supplied by Welles himself.

The last film to be completed by Orson Welles is also probably his most challenging. A tricksy combination of documentary, discourse and sleight of hand, F for Fake is as elusive as it is playful.

For all its nods, winks and witty asides, it's a richly personal work, picking over the questions every creative artist must eventually ask: Am I 'for real'? Does it matter? And what is all this work worth, anyway?

F for Fake is as grand, multitudinous, and original as Welles himself.

Welles stretches his material and his legend just about as thin as possible in this tedious treatise on truth and illusion.

Did Welles write those marvelous lines about reality himself? He must have.

I enjoyed every dubious minute of this bit of hanky-panky.

A mischievous mash of mock-doc, magic show, lecture and comedy.

A buoyant, delightfully playful Orson Welles exposes the artifice of film in his 1975 head scratcher, F For Fake.

Like every good magic show, there's much more here than first meets the eye.

Audience Reviews for F for Fake

A documentary/essay about the art of trickery. Opening with a series of magic tricks, performed by Welles himself, the movie explores two characters who became famous for lying, for tricking others, and by doing it pretty damn well. Very engaging, fun, you can see this as the blue print for many modern documentaries that use a similar style of "free" narrative/performance mode. Movies are a form of fakery after all, Welles is the first one to call himself a charlatan, and with great wit he takes us to this fantastic voyage of illusions, a house of mirrors. What matters is not things being "real" or "fake", but how interesting, appealing and well made they can be.

Exit Through the Gift Shop's grandpappy in the fields of cinematic subversion and grappling with "art." I found it sort of dry, as a matter of personal taste, but in terms of objective craftsmanship it's thoughtful and academic and a brilliant note for Orson Welles to close his career on. Hugely valuable.