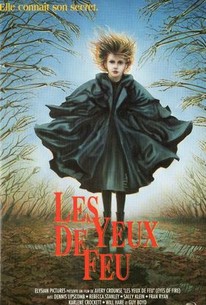 An interesting diversion for the genre, this stylish but leaden supernatural period piece tells the tale of an 18th-century minister (Dennis Lipscomb) and his flock who are exiled to the wilderness after being accused of witchcraft by the citizens of Dalton's Ferry. The small community settles briefly in an eerie valley in Shawnee territory -- which is also the domain of a powerful demon and his earthen underlings. As horrific apparitions and bizarre events begin to haunt the party in increasing frequency, a young madwoman believed to be a witch brings her own formidable powers to bear against the demonic menace. Good performances and beautiful location cinematography help to create a mood of encroaching doomretentious dialogue, leaden pacing and an overabundance of clunky religious allegory causes the entire project to collapse under its own ponderous weight.

Dennis Lipscomb
as Will Smythe

Will Hare
as Calvin

Lenard Petit
as Frenchman
View All

Critic Reviews for Eyes of Fire

Audience Reviews for Eyes of Fire

There are no featured audience reviews yet. Click the link below to see what others say about Eyes of Fire!