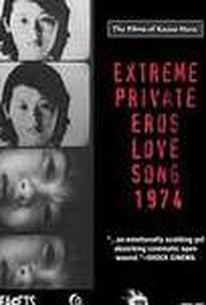 Noted Japanese documentary director Kazuo Hara makes an obsessive, compelling film about Takeda Miyuki, his former lover. Drawn by her letters, he goes to Okinawa and documents this remarkably strong-willed woman as she has a relationship with an African-American soldier, bears their interracial child alone, and discusses the director's shortcomings with Hara's producer and lover, Sachiko Kobayashi. This film is a landmark in the development of Japanese documentaries, as it began a shift in perspective from collective films about social issues, as seen in Shinsuke Ogawa's early works, to intensely personal works about individuals. ~ Jonathan Crow, Rovi

At first portending a sadistic macho trip, Extreme Private Eros proves to be an unexpectedly humanist, even feminist film...

While navigating the relatively new terrain of their breakup, Miyuki is also politically invested in challenging traditional conceptions of women's roles at home and in Japanese society.

There are no featured audience reviews yet. Click the link below to see what others say about Extreme Private Eros: Love Song 1974 (Gokushiteki erosu: Renka 1974)!