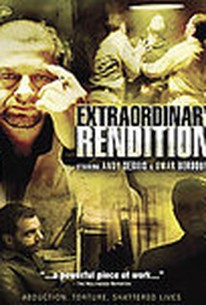 First-time feature filmmaker Jim Threapleton takes inspiration from the case of a Canadian citizen who was imprisoned and tortured in Syria for an entire year to tell this tale of a man who is abducted on the streets of London and placed into a nightmare world of seemingly endless solitary confinement. Zaafir Ahmadi (Omar Berdouni) is a UK citizen of Moroccan descent. One day, after being confronted by authorities in a local warehouse, Zaafir is approached on the street by an intimidating gang of thugs. Before he knows what has happened Zaafir has been drugged, transported to an unknown destination, and placed in a sea container for holding. Now alone in a world where nothing is as it seems, the frightened prisoner soon finds his thoughts drifting back to the days spent with his beautiful wife Ewa (Ania Sowinski) and teaching college courses on democracy and the origins of terrorism. But this is only the beginning of Zaafir's suffering, because upon arriving in an unspecified Mideast country he is interrogated by the vicious Maro (Andy Serkis), who accuses the prisoner of providing financial aid to radical Islam. Subsequently tortured in hopes that he will provide a confession, Zaafir is eventually released back onto the London streets, but remains so scarred by his experience that he cannot even communicate with his sympathetic wife. ~ Jason Buchanan, Rovi

There are no critic reviews yet for Extraordinary Rendition. Keep checking Rotten Tomatoes for updates!

There are no featured reviews for Extraordinary Rendition at this time.