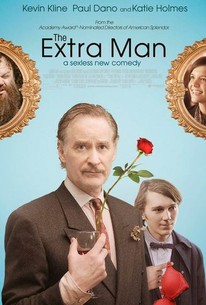 A sophisticated and moving comedy, THE EXTRA MAN follows Louis Ives (Paul Dano), a lonely dreamer who fancies himself the hero of an F. Scott Fitzgerald novel... When a deeply embarrassing incident forces him to leave his job at an exclusive Princeton prep school, Louis heads to New York City to make a fresh start. He quickly finds a nine-to-five job at an environmental magazine, where he encounters an entrancing, green-obsessed co-worker Mary (Katie Holmes). But it's Louis' new home life that really sparks his imagination. He rents a room in the ramshackle apartment of Henry Harrison (Kevin Kline), a penniless, wildly eccentric but brilliant playwright. When Henry's not dancing alone to obscure music or singing operettas, he's performing - with great panache - the duties of an "extra man", a social escort for the wealthy widows of Manhattan high society. These two men, separated in age by more than forty years, develop a volatile mentor/apprentice relationship. Through a series of urban adventures where they encounter everything from a leaping lion to a wildly jealous hirsute neighbor, from drunken nonagenarians to a shady Swiss hunchback, Louis and Henry form a memorable bond that bridges their differences.-- (C) Magnolia

Alicia Goranson
as Sandra
View All

News & Interviews for The Extra Man

View All The Extra Man News

Critic Reviews for The Extra Man

An entertaining kinky kick of a movie, a lightweight delight about dreamers and dilettantes.

The Extra Man is a disappointment coming from Berman and Pulcini, whose American Splendor was an imaginative biopic about the late comic-book author Harvey Pekar.

Dano and Kline are very fine performers. So why is this comedy such a chore? The answer appears to be whimsy overload.

Swifter comedic timing and a clearer narrative thread might have helped center this peculiar adaptation of Jonathan Ames's 1998 novel of the same name. Then again, maybe not.

Some actors are dinner. Kevin Kline is dessert, and his comic brio saves the film version of The Extra Man from its limitations.

But there's a level of humanity lacking at the center of all that forced quirkiness. These characters don't feel like people so much as harsh, animated bundles of affectations. It's lonely in there.

My goodness, there's an awful lot of acting going on here.

Belly laughs are few and far between but the overarching tone of silliness deftly underscored by the human experience makes for a largely fulfilling cinematic experience.

Audience Reviews for The Extra Man

A former English professor with curiosities about his sexual identity rooms with a modern-day fop in Manhattan. This is a quirky, whimsical comedy that has more than a few chuckle lines delivered by the irrepressible Kevin Kline. Kline's character is a fop, a fool who fancies himself a gentleman, and with over-wrought aphorisms his instruction of Louis, played by the demure Paul Dano, provides much of the film's delightful comic moments. There are times when the film overdoes its quirk, especially in the falsetto voice of John C. Reilly and some of the situations Louis's sexuality puts him into. On the flip side is the Katie Holmes character; the bland actress plays "the girl," a part with no personality and little use to the film's plot. Overall, The Extra Man features of a fine comic team in Kline and Dano, but their talents could have been put to better use had the film been more subtle; if only Miranda July, who adds just the right pinches of quirk, could have directed it...

Been passing over this one at Blockbuster for a while now. Mostly I was interested to see this for Lecy Goranson. There was nothing else there of interest. Having watched it, that's still true. Story is okay, young guy who enjoys cross dressing Loses his job and winds up moving and sharing a flat with a much older man who works as an escort. It's a bit slow and some of the characters I just found irritating. Lecy is only in it for five minutes at the end, but that scene is a highlight and quite funny. It's an okay movie to watch just once, but missing it would be okay too.

"They're not gigolos, they're gentlemen." A man who escorts wealthy widows in New York's Upper East Side takes a young aspiring playwright under his wing.

REVIEW
Bring Clifton Webb forward 60 years, add wackiness, and you have Kevin Kline as the eccentric bachelor in a rent-stabilized dump on the Upper East Side (yes, there are such flats still). His new roomie played by Paul Dano has a poignance, a sad yearning that I haven't seen conveyed so well since Timothy Bottoms in "Last Picture Show." Dano has the sort of face you only see nowadays looking at you across time in family pictures from a century ago or more. The face is ingenuous, pure. The kind of face that America just doesn't make anymore. Both characters have built protective walls around themselves, perhaps necessarily. Though they fascinate each other, and unintentionally entertain each other, they can't decide whether or not to be real allies. The older man depends on super-annuated ladies of wealth for his dining out and his winters in Florida. The younger man, though straight, enjoys wearing ladies lingerie while having sex. It can be all a bit depressing. But there's a soft landing, a nice ending to this opus all around.

I have always liked Kevin Kline, but even he couldn't save this movie for me. Mostly boring with very few, tiny laughs. Paul Dano really does nothing for the film. Dano and Kline play the Odd Couple very well, but the very slow-moving, go-nowhere, boring script makes the whole thing most uninteresting. Sad really. I had high hopes for this...