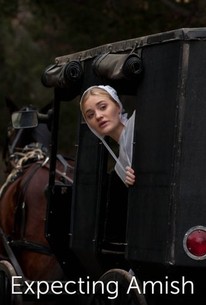 An 18-year-old girl is ready to become an Amish adult. By becoming an Amish adult she will be baptised in the Church and she will getting married to her Amish boyfriend. Her friends convince her to go on Rumspringa in Hollywood. When she is there she wears jeans and makeup for the first time since being in the Amish and she begins to think for herself instead, and also beings to make her own decisions. While in Hollywood she meets a boy who's a DJ. The two of them instantly becoming inseparable. On their last night together, she tells him that she doesn't want to be baptized and wants to stay in LA with him. When she goes home to return to Amish country, she finds out that she is pregnant. The teen girl must decide if she wants to stay with her Amish boyfriend or her new Hollywood DJ and be shunned.

Carrie Wampler
as Jennifer
View All

There are no critic reviews yet for Expecting Amish. Keep checking Rotten Tomatoes for updates!

Hannah is forced to decide between life on her Amish colony or life in the big city with all the trappings of modern life. I was a little disappointed in the script. Unless you are Amish, the decision was obvious. They should have written it so that the options were a little more equal.