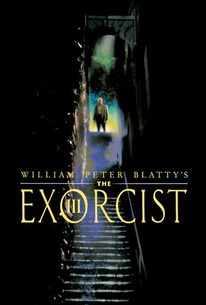 Critics Consensus: The Exorcist III is a talky, literary sequel with some scary moments that rival anything from the original.

Critics Consensus: The Exorcist III is a talky, literary sequel with some scary moments that rival anything from the original.

Critic Consensus: The Exorcist III is a talky, literary sequel with some scary moments that rival anything from the original.

The second sequel to the landmark 1973 horror film The Exorcist, this horror outing has little to do with the previous two. This time, the story centers on a police detective who for the past 15 years has been obsessed with solving a series of murders that occurred on the night of the first exorcism. These murders were exceptionally brutal and seemed to be the work of a serial killer who was executed in a prison that very night. A pair of priests assist with the gumshoe's investigation.

Edward Lynch
as Patient A

John A. Coe
as Old Man in Dream

C. Everett Koop
as Himself

Patrick Ewing
as Angel of Death
View All

Critic Reviews for The Exorcist III

Watching The Exorcist III is a frustrating experience, with both cuts of the film - one a victim of studio tampering, the other imperfectly restored - pointing to the better version of themselves that, like Karras, remains hidden within.

Against his will, Blatty added the sound-and-fury finale, and it's easily the weakest aspect of his movie. But that's mainly because everything that comes before it is so hauntingly understated.

It would be downright incomprehensible, in fact, if Dourif didn't do such a dandy job in explaining things in a couple of long, madman monologs.

It is unsparing when it comes to gruesome descriptions and ominous characters, but it's got more giggles than goose bumps. "The Exorcist III" isn't about to scare anybody.

May not have the visceral impact of the first film, but it gives viewers far more than they had any reason to expect.

Too much of the movie takes place in dark rooms where people describe horrors that might more profitably have been on the screen, and the plot is a house of cards that constantly collapses.

Suggests that Blatty had seen and loved many films without ever really paying attention to how they worked.

Exorcist III wields a mighty sword of scares and contemplation, drilling into those primal areas of nail-chewing tension...This film is a humdinger.

A good chunk of The Exorcist III is taken up by a series of sit-down chats; close-ups of Scott's ugly mug are the only half-frightening thing on the screen.

Audience Reviews for The Exorcist III

The Exorcist III should have been called by its original title, Legion. But due to marketing issues, the studio felt that it would succeed more under an Exorcist moniker. Well let me just say it's far superior to the heretic and is far more creepy and intriguing than the previous film. The cast does a fairly decent job, and the film is filled with tense moments of creepy atmosphere and suspenseful scenes. A solidly paced and directed horror film, Exorcist III is a different take on the story, but it does succeed on creating effective terror and jolts. Although not as memorable as the original masterpiece, Exorcist III is still a necessary film to watch. What's great about the film is that it still manages at delivering good scares, but unlike the original, it doesn't have the intensity that you'd want from a film like The original, but compared to the second one, this third entry is an improvement. There's plenty of good elements to deliver an effective horror film here, but in the end I felt it also was a good stand alone film as well, not a film that necessarily needed The Exorcist title on the cover. The film is very entertaining for what it is, and though is not as horrifying as the original film, it still has enough good horror bits to really make it an interesting, and scary horror film to watch. If you loved the original, was disappointed by the second; then check this one out, the film is worth your time, and will give you a few good jolts in the process.

A number of brutal and ritualistic-type murders that have taken place in Georgetown has police Let. Bill Kinderman, George C. Scott, deeply concerned. Lt. Kindeman was in charge of the "Gemini Killer" serial murder case that happened fifteen years ago and the MO of these killings are identical to that of that long ago killer. The fact that the murder victims now, a 12 years-old boy and two Catholic priests, were killed exactly the same way as those victims of the "Gemini Killer" were back then. The method of his savage actions was never reviled to the newspapers and the public yet these killings could not have possibly been done by him since the "Gemini Killer" was executed back in 1973, or was he? Worthy follow-up to the original movie "The Exorcist" if you throw out the awful "The Exorcist Part II: The Heretic" made some thirteen years earlier. William Peter Blatty's "Exorcist III" starts where "The Exorcist" left off when the heroic Father Karras, Jason Miller,fell down a long flight of stairs outside the MacNeil residents taking the demon who was in possession of young Regan MacNeil's body with him to his death. At that very moment the convicted "Gemini Killer" James Venamun, "Brad Dourif" was executed for his crimes. The Devil took advantage of this moment in time by transferring the soul of Venamun into the dead Father Karras' body and at the same time bring Karras back to life. Wondering around the streets of Georgetown the now unrecognizable and comatose Father Karras was taken into a local mental institution where he spent the last fifteen years, strapped down in a padded cell, and known to those in charge only as patient X. As time went by Karras' mental facilities slowly came back to him and with Venamun in control of his body and, this is hard to take, soul has been using the mental patients to do his bloody work. Manipulating their, crippled and very impressionable, minds the patients go out in the neighborhood as well as in the hospital and commit this latest string of "Gemini " killings. "Exorcist III" has a lot of dream-like and surrealistic scenes in it which at times confuses you. As it moves to it final conclusion, in the graphic battle between "Good" and "Evil", it becomes very clear to what it's been telling you for the first 90 minutes or so. "The Devil" through the helpless Father Karras, whom he brought back from the dead, is waging his war against "Good" with one of those saintly men who stood fought and died for it. George C. Scott gives his usual top-rate performance as the troubled and gilt-ridden, he felt that he should have saved Father Karras back in 1973, police Lt. Kinderman. At first Lt. Kinderman didn't really understand what he was up against, the Devil. When he finally did, at the end of the movie, he not only cast the Devil's demons out of the tragic priest but put Karras tortured soul to rest and peace forever, in a truly shocking and memorable final sequence. Both Brad Dourif & Jason Miller were just as good as Scott as the "Gemini Killer" James Venamun and Father Karras who both occupied the same, Karras', body. Like in a titanic tug of war Venamun and Father Karras were in conflict with each other throughout the entire movie. Until the evil, that was engineered by the Devil, on the people of Georgetown and the Catholic Church was finally put to an end. This is a film that I wish we could get a director's cut. They're was a different opening and ending along with other scenes taken out by the studio. It seems this footage is lost now but hopefully it will surface one day.

If you dont appreciate your time, watch this Movie. lol Every good creation has 3 sides The Exorcist 3 doesnt count!