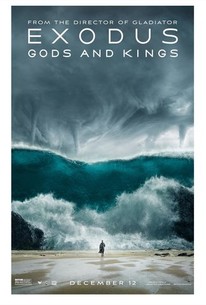 Critics Consensus: While sporadically stirring, and suitably epic in its ambitions, Exodus: Gods and Kings can't quite live up to its classic source material.

Critics Consensus: While sporadically stirring, and suitably epic in its ambitions, Exodus: Gods and Kings can't quite live up to its classic source material.

Critic Consensus: While sporadically stirring, and suitably epic in its ambitions, Exodus: Gods and Kings can't quite live up to its classic source material.

From acclaimed director Ridley Scott (Gladiator, Prometheus) comes the epic adventure "Exodus: Gods and Kings," the story of one man's daring courage to take on the might of an empire. Using state of the art visual effects and 3D immersion, Scott brings new life to the story of the defiant leader Moses (Christian Bale) as he rises up against the Egyptian Pharaoh Ramses (Joel Edgerton), setting 600,000 slaves on a monumental journey of escape from Egypt and its terrifying cycle of deadly plagues. (c) Fox

As a whole, Scott's version of this ancient tale feels oddly toothless -- neither religious or secular viewers will find much substance beyond the basics of the spectacle in play.

It's a story that has been told and retold for thousands of years, but this po-faced, dutifully spectacular retelling barely lingers in the memory beyond the end credits.

It's sad to say that the most interesting aspects of this film don't actually occur on the screen.

'Exodus: Gods and Kings' is spectacular.

This is the first portrayal of God I've ever encountered who looked like he could use a good spanking.

Sadly, by the time we get to much of the action, it doesn't have any weight. Why build such a real world if you're not going to populate it with interesting people?

[T]he visual spectacle is reason enough to see Exodus: Gods and Kings. [Dariusz] Wolski's imagery is also fueled by the production design of Arthur Max which is beyond impressive.

That the film's only exuberant display of cinematic prowess is reserved for an extended 30-minute sequence of God raining His wrath down on the ruling class won't be lost on viewers in the year 2014, which has seen so much racial injustice...

Ridley Scott may be 77, but he's making films with the energy and ambition of a man half his age.

Moses' tale of taking the Hebrews out of Egypt and slavery makes for some massive eye candy scenes of course. Some feel oddly artificial here, though. It doesn't help that some of the casting choices seem out of place. After a really slow middle part the biblical plagues finally kick the movie into gear but in the end it's just not all that interesting until we finally see the red sea part. Odd choices like God sending an overacting child as his messenger do not exactly help. Ridley Scott remains a director with a wide range of topics, but also of quality. This one's in the lower third.

Unfortunately controversy muted the response of this usually popular Biblical story, that the cast was not as diverse as the cultures historically involved, and so reception was tame. Regardless of that the presentation, sort of a modern day take on the Cecil B. DeMille version (the definitive take, yah?) is not bad at all. It only feels lacking the sumptuous depravity, the glorious spectacle of the previously mentioned, it feels less through no fault of its own. Its still worth a look.

A flawed though ambitious adaptation of the story of Moses (Christian Bale) and Ramses (Joel Edgerton), and how they begun as basically brothers, but how God's will propels one to fight for the freedom of his people, and the other for the survival of his kingdom. While far from director Ridley Scott's best work (that belongs to "Alien" and "Black Hawk Down"), this is certainly a decent admission into his filmography. Sure, there are some gaps in the storyline (to be fair, it is a tough one to fit in under a three hour frame) and the middle section is slow-paced given the nature of the development of the story, but ultimately this movie is not bad by any means. This is a better realized version of a Biblical story than "Noah" was, and even though the film has problems (God being portrayed as a little boy is a big error), the mere scope and look of the picture and the time it takes place is fascinating, even if in the end it does not earn an automatic recommendation.