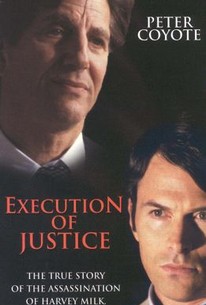 Based on a true story, this crime drama is adapted from Emily Mann's play about the murder of Harvey Milk (Peter Coyote), the first openly gay City Supervisor in San Francisco, who was assassinated along with Mayor George Moscone (Stephen Young) in 1978. While city employee Dan White (Timothy Daly) was found guilty of the crime, the charge was reduced from murder in the first degree to voluntary manslaughter when his lawyers claimed that White became emotionally unstable after eating too much junk food; this controversial and much-derided legal tactic became known as the "Twinkie Defense." White served five years in prison for the double murder before committing suicide in 1985. Execution of Justice was produced for the Showtime premium cable network.

Critic Reviews for Execution of Justice

This is an amazing amount to think about in a television movie.

the crowd scenes of gays . . .seem stereotyped as does the Village People music used. But remember that the folks who put together this project like us. They really like us.

There are no featured reviews for Execution of Justice at this time.