Excuse Me for Living2012 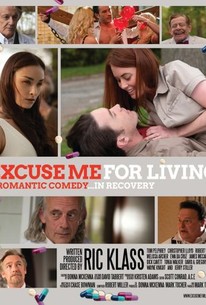 Excuse Me for Living Photos

Excuse Me For Living is the story of Dan Topler (Pelphrey), a rich, smart, suicidal twenty-something who dropped out of medical school to pursue his own drug habit. Well provided for and a bit coddled, he refuses to grow up or get happy. After a suicide attempt on the George Washington Bridge lands him in an upscale rehabilitation clinic, Dr. Jacob Bernstein (Vaughn) takes him under his wing. The doctor issues these commands: obey the no-drugs rules, and join the geriatric temple men's group he leads-or face incarceration. Meanwhile, Dan's prep school friends continue to lure Dan to bacchanals. Dan's addiction and tired mind can't resist the drugs, booze, and women, until he becomes smitten with Laura (Archer), Dr. Bernstein's daughter. -- (C) Official Site

David A. Gregory
as Bruce
View All

Critic Reviews for Excuse Me for Living

A catchy but irrelevant title is the first of many problems with Excuse Me for Living, which throws together a lot of superficially flashy elements that never gel in any organic way.

Like Lloyd, who plays the clinic's leading loon, "Excuse Me" is much more about making fun than making sense.

Is it a comedy if the audience laughs or is it a comedy if laughs were intended, irrespective of whether they're generated? "Excuse Me for Living" qualifies under the second definition.

A lumbering mess in which [Klass] has somehow trapped several recognizable actors.

Atrocious dreck that feels sitcomish, only without the polish or panache.

No strand of Excuse Me for Living's frantic, unfunny, and pseudo-thoughtful narrative is well conceived.

There are no featured reviews for Excuse Me for Living at this time.

Excuse Me for Living Quotes