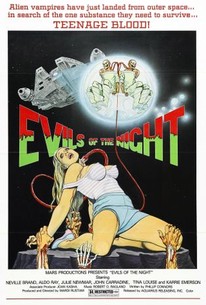 Evils of the Night Photos

This uproariously bad sci-fi horror oddity plays like a modern version of a cheesy '50s alien invasion flick, only not as clever. The filmmakers deserve some credit for throwing everything but the kitchen sink into the plot (and perhaps even the sink's in there somewhere), which involves the diabolical plans of three silver-suited aliens, played by -- ready for this? -- John Carradine, Julie Newmar (TV's Catwoman), and Tina Louise (Ginger from Gilligan's Island), who hire a couple of drunken wrench jockeys (Neville Brand and Aldo Ray) to help them abduct a bunch of lame-brained teenage campers for use in the production of a youth-restoring serum. This allows for endless riffing on the Friday the 13th scenario, as over-sexed teens are stalked by ski-masked Brand and Ray. B-movie fans should be forewarned that this film's once-in-a-lifetime acting ensemble does virtually nothing to enhance the negligible entertainment value.

Critic Reviews for Evils of the Night

There are no critic reviews yet for Evils of the Night. Keep checking Rotten Tomatoes for updates!

Audience Reviews for Evils of the Night

There are no featured audience reviews yet. Click the link below to see what others say about Evils of the Night!

Evils of the Night Quotes