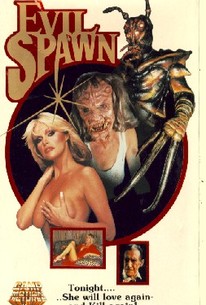 Evil Spawn, a violent, bloody, but surprisingly effective English horror film directed by Kenneth Hall, deals with a woman's fear of aging and its consequences. When a space probe brings back microbes, scientist Dr. Zeitman (John Carradine) uses them for his experiments in aging but dies before his work is finished. An aging actress, Lynn Roman (Bobbi Bresee), desperate because she is being passed over for roles being given to younger women, injects herself with the drug -- hoping to become young again. The microbes in the serum turn the actress into a bug-like alien killer who quickly deals with her rivals. The film is routine, but the special effects are frightening and the premise is interesting, and while it adds little that is new, is worth a view for horror-film fans.

Chris Kobin
as Will

There are no critic reviews yet for Evil Spawn. Keep checking Rotten Tomatoes for updates!

There are no featured audience reviews yet. Click the link below to see what others say about Evil Spawn!