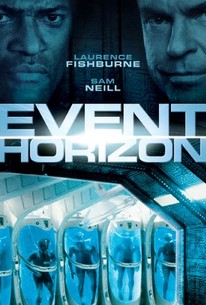 Critics Consensus: Despite a strong opening that promises sci-fi thrills, Event Horizon quickly devolves into an exercise of style over substance whose flashy effects and gratuitous gore fail to mask its overreliance on horror clichés.

Critics Consensus: Despite a strong opening that promises sci-fi thrills, Event Horizon quickly devolves into an exercise of style over substance whose flashy effects and gratuitous gore fail to mask its overreliance on horror clichés.

Critic Consensus: Despite a strong opening that promises sci-fi thrills, Event Horizon quickly devolves into an exercise of style over substance whose flashy effects and gratuitous gore fail to mask its overreliance on horror clichés.

In this sci-fi/horror scarefest, Dr. William Weir (Sam Neill) is a scientist who has designed a spacecraft called Event Horizon which will explore the outer reaches of space past the planet Neptune; the ship employs a special transport mechanism that, in effect, creates a black hole that the ship can pass through, allowing it to travel tremendous distances in a few seconds. The Event Horizon mysteriously disappears in the midst of a mission with no trace of either the ship or its crew, but it reappears in Neptune's orbit after a seven year absence and it's sending out a distress signal. The spaceship Lewis and Clark, and Dr. Weir, are sent to investigate; the crew -- Captain Miller (Laurence Fishburne), pilot Smith (Sean Pertwee), engineer Justin (Jack Noseworthy), navigator Starck (Joely Richardson), physician D.J. (Jason Isaacs), and emergency technicians Peters (Kathleen Quinlan) and Cooper (Richard T. Jones) -- are already tired and unenthusiastic about this assignment, and somewhat confused by Weir's reports. The crew of the Lewis and Clark are convinced that Weir is not telling them something, and when they discover the Event Horizon, they find that things are not what they seem, and an evil presence has taken over the ship. Incidentally, the term "event horizon" describes the outer boundaries of a black hole.

A loud and nasty hunk of science-fiction horror.

The sets are indeed terrific and the special effects quite remarkable, as the chill of the uncertain future is mixed with a steamy gothic past. But, to paraphrase Winston Churchill, never have so many done so much to such little purpose.

Director Anderson gets points for skillfully choreographing all of this, but he loses them for a consistent desire to brutalize the audience.

Don't worry, it's not you. It really doesn't make any sense.

A movie where the contours of the cut ideas are more interesting than what ended up on the screen.

Despite a few nifty special effects, this sci-fi horror film, in which grisly things happen to a space crew after its members board an abandoned ship, is a boring and blood-soaked mess.

With high production values and low aspirations, Event Horizon begins as a mildly intriguing science-fiction movie and degenerates into yet another slasher flick about evil from another dimension.

But unfortunately, Anderson can't seem to decide whether he's making a sci-fi thriller, a ghost story, a gory horror film or a metaphysical musing on the nature of good and evil.

There is little to recommend in this nonsensical, repulsively gory outer-space yarn other than moody interiors and a few adequate special effects.

A great sci-fi horror flick (essentially a haunted house movie in space with a little bit of Hellraiser) that was sadly under-appreciated when it first came out. Paul W.S. Anderson (in a rare moment of creative inspiration) does a great job of keeping up a great tense atmosphere and the practical effects are superb (although instances of CGI in the movie are one of the few weak points). There are plenty of great tense sequences, effective jump scares, and absolutely messed-up imagery. The acting isn't too bad either, actually the quality of the acting goes a long way in selling the plot. Sam Niell and Laurence Fishburne really shine in this but the rest of the supporting cast are solid too, especially Sean Pertwee. If you love sci-fi and horror, then check it out!

A lousy and unimaginative mix of Solaris, 2001: A Space Odyssey, Alien, The Shining, Hellraiser and more - and if being a ragbag like this doesn't give you an idea of the disaster that could only come from it, the cheap, loud scares and Anderson's awful direction are definite proof.

Boo! In space. No, wait, it's all in yer mind. Oy. Disappointing.

Sam Neil shines in this. I think this an extremely underrated movie. Its awesome thriller horror flick