The Even Stevens Movie2003 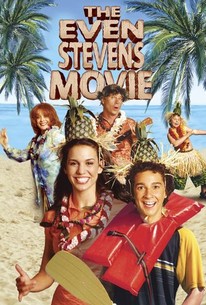 The Even Stevens Movie Photos

Based on the popular (and recently canceled) Disney Channel sitcom Even Stevens, this made-for-TV movie was filmed in 2002 under the title The Stevens Get Even. On this occasion, the Sacramento-based Stevens family is reeling from a succession of setbacks, not least of which is the breakup of the romance between teenaged daughter Ren Stevens (Christy Romano) and her boyfriend -- a disaster largely brought about when Ren's pesky kid brother, Louis (Shia LaBeouf), sabotages Ren's junior-high graduation. At their most vulnerable, the kids' parents Eileen (Donna Pescow) and Steve (Tom Virtue) are highly receptive to fast-talking vacation agent Miles McDermott (Tim Meadows), who sells the family an inexpensive trip to an island paradise. En route, the Stevens' plane crashes on a seemingly uncharted isle, forcing the family, and the other passengers, to fend for themselves. What nobody but the duplicitous McDermott knows is that the crash was carefully rigged, so that the Stevens would be unwitting contestants on a Survivor-like TV reality series. In addition to the aforementioned Romano, LaBeouf, Pescow, and Tom Virtue, other carryovers from the original sitcom include Nick Spano as Donnie Stevens and Steven Anthony Lawrence as the family's wacky next-door neighbor, Beans. Filmed on location in Hawaii, The Even Stevens Movie made its Disney Channel debut on June 13, 2003.

Critic Reviews for The Even Stevens Movie

The Even Stevens Movie could make you think of Gilligan's Island -- it's not great television, but fans should be pleased.

... inflates the inexplicably popular TV series into a movie in which the whole obnoxious family thinks it's going on a prepaid holiday to a Pacific island...

I actually found this movie to be quite a hoot.

For hardcore fans of the series only.

Audience Reviews for The Even Stevens Movie

A fun continuation of the show, yet it was not really where it should have been. It's more of a vacation movie than a family sit com. While there's nothing wrong with that, I was too invested with the characters to have it end this way. However, I can't say that I didn't laugh or enjoy Lewis destroying native island traditions.

My ex bf got me into watching this show...well, I only watched it when I went over to his house...he was such a kid.

The Even Stevens Movie Quotes