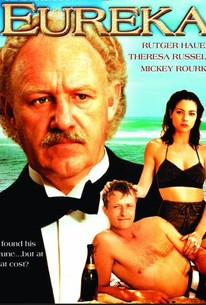 Adapted by Paul Mayersberg from the speculative novel Who Killed Sir Harry Oakes?, Eureka! relies almost exclusively upon star Gene Hackman for its success. Striking it rich in the Klondike, Jack McCann (Hackman) lives high on the hog for 30 years on a tropical island. Though wealthy, he's not happy, fearful that someone will come along and steal his fortune. Things come to a disastrous head when McCann is suddenly beset with unwelcome visitors, including mob hit-man Mayakofsky (Joe Pesci). Theresa Russell co-stars as McCann's daughter Tracy, who has plenty of trouble of her own. The film ends with an elongated courtroom scene that slows Nicholas Roeg's already leisurely pace to a leaden walk. Completed in 1981, Eureka! spent five years in relative obscurity before it was finally given widespread release.

... the director's strivings for tricky effects seem to have left him little attention to spare for developing his characters or drawing passable performances from his actors...

More a curio than a straightforward classic, Nicolas Roeg's Eureka is beyond weird.

...for all its moments of brilliance that rival anything Roeg ever did, Eureka fails. The film stumbles under one of the weakest scripts he ever dealt with.

Eccentric even by Roeg standards, this goes overboard with the histrionics, and even the slight supernatural tinge that defines Roeg's films is clumsily handled here. Yet there are some thought-provoking ideas and exchanges, and the acting is impeccable.

In its own convoluted way, tells us that money can't buy us happiness.