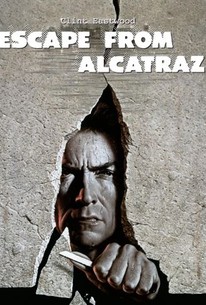 Critics Consensus: Escape from Alcatraz makes brilliant use of the tense claustrophobia of its infamous setting -- as well as its leading man's legendarily flinty resolve.

Critics Consensus: Escape from Alcatraz makes brilliant use of the tense claustrophobia of its infamous setting -- as well as its leading man's legendarily flinty resolve.

Critic Consensus: Escape from Alcatraz makes brilliant use of the tense claustrophobia of its infamous setting -- as well as its leading man's legendarily flinty resolve.

No one can escape from Alcatraz, right? Try telling that to lifer Frank Morris (Clint Eastwood). This Donald Siegel-directed nailbiter is a reenactment of Frank Morris' 1962 attempt to bust himself and two other cons out of The Rock. Eastwood, as Morris, tilts with nasty warden Patrick McGoohan for a while, befriends several fellow prisoners, and picks the guys with whom he'll make his escape. Among his break-out buddies are the Anglin Brothers (Fred Ward and Jack Thibeau), with whom he'd served in other lockups, and several others who've got their own special reasons to despise the sadistic McGoohan. Filmed on location at the newly renovated Alcatraz, Escape From Alcatraz was another box-office winner for the Eastwood/Siegel combo.

News & Interviews for Escape From Alcatraz

View All Escape From Alcatraz News

Critic Reviews for Escape From Alcatraz

Escape From Alcatraz is a nifty prison movie, among the best of that genre ever made.

Escape from Alcatraz is relentless in establishing a mood and pace of unrelieved tension.

It's an austere depiction of the tedious routines of prison life, and of the courage and strength of spirit needed in coping with unpleasant warders, tough fellow-inmates, and a life sentence.

It's one of those very difficult exercises in which large emotions, like the compulsion to be free, are reflected in minute actions, like the chipping away at stone with a pocket nail clipper.

What Mr. Siegel has made is fiction, a first-rate action movie that is about the need and the decision to take action, as well as the action itself.

Never before and never again would Siegel engage in this type of cinematic bravura.

Displaying his subtle, supreme mastery of the craft of filmmaking, director Don Siegel employs superb control of the frame.

Stay for this solid prison movie

Clint Eastwood does a notable job. Moreover, the secondary actors are also effective. It's easy to understand the success of the film, destined to stand out this boring and mediocre holiday. [Full Review in Spanish]

Eastwood is working with director Don Siegel for the fifth and final time.

One of the better prison break films.

Audience Reviews for Escape From Alcatraz

Representing the culmination of a decade long collaboration between director Don Seigel and perpetual 1970's Clint Eastwood Escape from Alcatraz is a very loose account fo the 1962 escape from the legendary prison located in San Francisco Bay. The film opens with Frank Morris (Eastwood) being delivered to his new island home. He meets the hard ass warden (Patrick McGoohan) and delivers the speech to Morris about no one ever escaping Alcatraz and no one ever will. The film then follows Morris and his compatriots (Jack Thibeau, Fred Ward, and Larry Hankin) use their wits and the materials they have on hand to make their daring escape. Shot on the actual island, the film has a washed out and bleak look that obviously mimics its location in the foggy and cold bay area. The order in these broken down buildings shows how the island has rotted away with time, but the cogs of justice have continued to turn no matter what happens. Clint Eastwood's performance is one of his best, on par with Josey Wales or Unforgiven. You are not watching Dirty Harry in this film as Eastwood leaves that persona before the opening credits roll. The performances throughout the film are filled with hopelessness and even characters not involved in the escape seem to perk up when it's even hinted at. It's like sun light breaking through the clouds for one solitary moment. As a whole, the theme of the film is hope. All of the convicts are hopeless until Frank shows up and starts filling their minds with the possibility, the hope, of escape. Could there be a way out of Alcatraz that doesn't end in death? This is another '70's film that flipped the good guys and the bad guys. Once again, after Vietnam and Watergate, the nation lost confidence in its authority figures. In Escape from Alcatraz you are rooting for the cons to overcome the authority that keeps pressing its thumb down on them from the opening moments. It is a great film that is really an underrated masterpiece of the 1970's.

An efficient prison break movie that manages to be tense and gripping, even though there is nothing really memorable about the plot and it doesn't even make any attempt to conceal its artificial and clearly manipulative efforts to create suspense in many key scenes.

Maybe for its time, it was considered a great masterpiece but with little character development and no real emotions it's hard to like this slow paced uneventful long movie!

Warden: Some men are destined never to leave Alcatraz... alive.  "No one has ever escaped from Alcatraz... And no one ever will." Escape From Alcatraz has always been a movie of great interest to me. I've seen it probably a dozen times by now and I still am engrossed by every minute of it. I first watched this movie when I was nine years old, shortly after visiting Alcatraz. The prison is an eerie place and the movie brings that out through the characterization of the inmates and especially of the warden. The film has obviously been worn down over the years, but I still hold it up as one of the best prison movies out there. Especially, prison escape movies. Frank Morris arrives at Alcatraz and is told by the warden that it is inescapable. Morris had broken out of prisons before and that's why he was sent to Alcatraz. He starts nosing around trying to find a way out, when two old prison buddies show up. They too were sent to Alcatraz for breaking out of prison. Through prison jobs  they get the necessary equipment they need to try to break out of there cells and hopefully the prison altogether. The ending isn't much of a secret, unless you know absolutely nothing about the history of Alcatraz, but it is a suspenseful film nonetheless.  Don Siegel and Clint Eastwood are again collaborating on this one, and it, to me, is their best collaboration. Eastwood is playing a prototypical Eastwood character, while a nice supporting cast brings presence to the characters around him. There's intrigue in the friendships, anger at the warden, and a hope that Frank can really make it out. The movie succeeds because it is able to make us care if a criminal is able to make it out.  The film isn't a masterpiece by any stretch, but what it is, is a cool and intriguing film about one of the most famous jailbreaks in history. Actually, THE most famous jailbreak in history. I wouldn't call it a must watch, but if you are a fan of Eastwood or at all interested in Alcatraz, it is a very worthwhile film. The pacing is just right and we all know Siegel knows how to create suspense from just about anything. There's not a lot of action in the movie, mostly plotting the escape and what not, but the suspense level couldn't be higher throughout the whole film.