Errors Of The Human Body2013 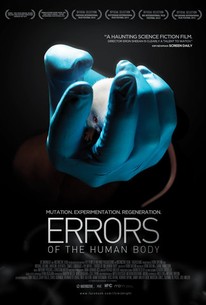 Errors Of The Human Body Photos

Obsessively struggling to develop a cure for a rare genetic ailment, which caused the death of his infant son, Geneticist Geoff Burton, played by Michael Eklund from The Call, is forced to relocate to an isolated research facility in Dresden, Germany. Completely consumed by his research, Burton is on the brink of discovery but soon realizes that his own work may bear more consequences than he previously thought. -- (C) Mammoth

Ulrich Meinecke
as Waldemar
View All

Critic Reviews for Errors Of The Human Body

Errors Of The Human Body is a thought-provoking, slow burn thriller that speaks to the moral conscience within each of us when it comes to science versus ethics and playing God.

The film eventually reveals that it has no interest in delivering the thrills or chills that its foreboding first half painstakingly constructs, instead settling for mediocre melodrama.

As smart as it is suspenseful and as contemplative as it is creepily effective, the feature swarms with the potential of its competent helmer and commanding lead actor, even as it drifts towards an intriguing conclusion.

The film itself is quiet, as is Eklund's performance, but the research they are conducting, and the beautiful space of the lab, always give you something to keep your mind occupied.

Benefits from a riveting lead performance by the piercing-eyed Michael Eklund, who brings a brooding, destructive impulsiveness to his geneticist Geoff Burton.

A brooding drama set in a medical research facility, Errors of the Human Body combines some elements of sci-fi and horror, albeit in passing

Errors Of The Human Body surely lives up to its title, riddling this cinematic body with errors as well.

crossbreeds the speculative trajectory of genetic research with the eternal complexities of interpersonal relations to create a coolly sombre tragedy with a hint of Cronenberg.

Audience Reviews for Errors Of The Human Body

This is a good movie. There's some part of this movie that reminds me of Cronenberg's The Fly with Michael Eklund's descent into madness as he's infected with the virus that claimed the life of his son and his obsession to find a cure for it. The movie is incredibly smart and it's obvious that a lot of work went into making the more scientific stuff seem credible and believable. If there's a problem is that the movie does take a while before it really starts to get going. I think the movie does make a concerted effort to add a little tension to the events with its score and editing. I thought those parts were cool, but it is a movie that will definitely test your patience for a while. But I think Michael Eklund's unhinged performance helps make this movie more than watchable. And the movie also brings up some interesting questions about the ethics of some of these studies and whether the ends justify the means. There's also themes of obsession, with Geoff obsessing over finding a cure to Burton's syndrome. And then there's the ending and the twist and its implications. I'm not sure whether I thought it was a good twist or a bad one. Certainly its implications are actually really dark, but at the same time it does feel kind of cheap. Because it's like 'Oh hey, you know that thing we spent so much time working on? Turns out it's a non-issue and it has always been since the beginning of time'. That felt really cheap to me, though it adds a darker layer to Geoff's character, but it sort of makes everything that happened in the movie irrelevant and pointless. I still thought this was a good movie with some interesting ideas and a great performance from Michael Eklund, it has its issues, but this is still a solid movie.

Errors Of The Human Body Quotes