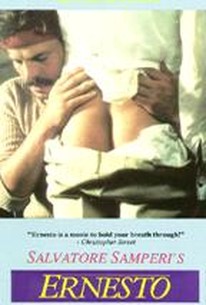 Ernesto (Martin Hahn) is a young Italian Jew of the early 1900s who works in his uncle's factory in Trieste. Not entirely secure with his sexual orientation, Ernesto enters into an affair with one of his uncle's employees--then experiments with heterosexuality, courtesy of an obliging prostitute. When the boy finds himself participating in an arranged marriage with the female twin of one of his male lovers, he finally makes the choice that will determine the direction of his subsequent sex life. The carnal confusion inherent in Ernesto is nothing new to director Salvatore Samperi, who has trod this path before in previous films. This particular effort was based on a novel by Umberto Saba. ~ Hal Erickson, Rovi

Lara Wendel
as Emilio/Rachel
View All

Earnest, plodding and frankly propagandistic - it was made with the cooperation of the Cuban government - Ernesto may seem a strange project choice for a Japanese filmmaker.

There are no featured reviews for Ernesto at this time.