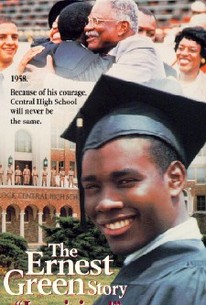 This well-mounted made-for-cable film zeroes in on the personal story of Ernest Green, the only senior among the nine black students who integrated Arkansas' Little Rock High School in 1957. Faced with pressure from both his taunter and his peers, Ernest manages to survive a harrowing year with his courage and intellect intact. Morris Chestnut of Boyz in the Hood fame stars as Green, while Ossie Davis co-stars as Ernest's grandfather. Though produced for the Disney Channel, the dialogue in The Ernest Green Story is occasionally as raw and uninhibited as the subject matter demands. The film debuted January 17, 1993.

Director Eric Laneuville can stage frothing mob scenes with the best, contrasting this shrill abnormality with the sane home environments of [Ernest] Green and his fellow integrators, leaving no doubt as to who are the animals.

If they can get past the ugliness, children may be enlightened by the common message of [The Ernest Green Story].

There are no featured audience reviews yet. Click the link below to see what others say about The Ernest Green Story!