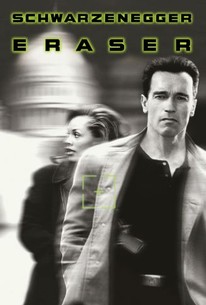 Critics Consensus: Eraser's shoot-'em-up action might show off some cutting edge weaponry, but its rote story is embarrassingly obsolete.

Critics Consensus: Eraser's shoot-'em-up action might show off some cutting edge weaponry, but its rote story is embarrassingly obsolete.

Critic Consensus: Eraser's shoot-'em-up action might show off some cutting edge weaponry, but its rote story is embarrassingly obsolete.

Top-notch action sequences and exciting stunt work highlight this fast-moving thriller. John Kruger (Arnold Schwarzenegger) is a top agent in the U.S. Marshalls' Witness Protection Program; it's his job to "erase" the pasts of Federal witnesses under his watch and deal with anyone who tries to hurt them. Kruger's latest assignment is to protect Lee Cullen (Vanessa Williams), who while working for a major weapons manufacturing firm discovered evidence that the company was selling new, high-tech weapons to intentional terrorists groups with the cooperation of a faction of enemy agents within the United States government. However, when Kruger discovers that the Witness Protection Program has a rat in the house -- and that rat is his boss, U.S. Marshall Robert Deguerin (James Caan) -- Kruger has to guard his own life while trying to protect Lee's. The supporting cast is highlighted by James Coburn, Robert Pastorelli, and James Cromwell.

Rick Shuster
as Pilot
View All

The stunts, even show-stopping ones such as our man throwing himself out of a plane without a parachute and landing on a car without sustaining injury, have an air of desperation about them.

Eraser is totally meaningless summertime entertainment, but it means something, I suppose, that it has been done so well.

The advanced weaponry and nifty scopes notwithstanding, most of the gunplay is pretty standard-issue, with most of the victims being anonymous targets present just to be picked off.

It's a movie constructed around three or four self-consciously 'cool' episodes, and passably entertaining as such, but there's also an awful lot of uncool contrivance, coincidence and contempt for the audience.

This is one of those movies where good guys don't miss, and bad guys can't shoot to save their lives.

Big-budget action filmmaking at its dullest.

As entertaining and solid as its leading man.

It's the sort of plot you've seen so many times before that you forget exactly where you've seen it before, though you know it probably worked better then.

James Caan is good as the heavy, but the movie degenerates into routine comic-book mayhem.

...a minor addition to the Schwarzenegger oeuvre

Arnold Schwarzenegger has had a phenomenal career as an actor with Eraser; he delivers yet another entertaining performance, one that I find to be a bit underrated. The film is not too original, but it's one that is thoroughly entertaining, and is sure to please Schwarzenegger fans looking for an action packed thrill ride. The film has its flaws, but the direction by director Chuck Russell keeps it together, and he has made pretty good films, and he tackles the material well. Although not his best work, Eraser is a pleasant action film, and he directs it with confidence and gives it an edge to really make it engaging. Some scenes are thoroughly entertaining, and there are many memorable scenes, but this isn't Schwarzenegger's best film either. Eraser is worth seeing, and it is a well crafted affair. If you enjoy mindless action pictures, give this one a shot, it may not be a standout Schwarzenegger vehicle, but it still possesses enough entertainment value to appeal to action film buffs who want a pleasant time waster to watch. Eraser may not win any points for originality, but it's a well crafted affair, and in away a forgotten picture from Schwarzenegger's body of work, due to the fact that he has starred in far superior pictures over the course of his career. Despite its imperfections, it's far from his worst, and like The 6th Day, is one of his most underrated films, and it's worth a second look if you enjoy his work. Sure, there are aspects that could have been improved upon, and Eraser does fall short of what it could have been, but for the most part, it's a well executed actioner that is better than what most people have said about it.

Here's a cool scene: A crocodile is about to eat up Arnold as he scrambles away and pulls out a pistol and shoots it dead. The camera cuts to a close-up shot in his face as he says, "You're luggage." LOL There were some scenes that were entertaining to watch which makes this movie worth watching.

I really liked this movie when I first saw it, but now I barely remember it. I need to see it again.

Not the best film but Katherine Heigl and Gerard Butler are hilarious together. A must see!