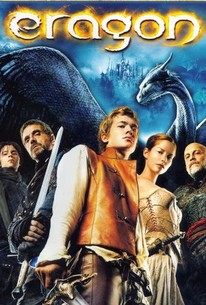 Critics Consensus: Eragon is a fantasy epic that lacks any magic, brought down to earth by unconvincing world-building and a litany of stars who seem bemused by the material.

Critics Consensus: Eragon is a fantasy epic that lacks any magic, brought down to earth by unconvincing world-building and a litany of stars who seem bemused by the material.

Critic Consensus: Eragon is a fantasy epic that lacks any magic, brought down to earth by unconvincing world-building and a litany of stars who seem bemused by the material.

Industrial Light and Magic special-effects wizard Stefen Fangmeier makes the leap into the director's chair with this coming-of-age fantasy concerning a young boy whose discovery of a mysterious dragon egg leads him on a predestined journey to become a Dragon Rider and defend his peaceful world against an evil king. Based on the best-selling novel by Christopher Paolini, Eragon tells the tale of the titular character (Ed Speleers), a humble farm boy living in the land of Alagaësia, whose life is forever changed when he discovers that he has been chosen to fight the most powerful enemy his world has ever known. Jeremy Irons, John Malkovich, and Djimon Hounsou co-star in a film produced by Davis Entertainment and adapted from the novel by screenwriters Peter Buchman, Larry Konner, and Mark Rosenthal.

Michael A. Mehlmann
as Villager No. 1

Tamás Deák
as Villager No. 2

Spencer Wilding
as Razac No. 1

Gábor Hortobágyi
as Razac No. 2

Edward Speleers
as Eragon
View All

Give Eragon a few years: By then, it might be delightfully bad.

John Malkovich finds his loopy, nostril-flaring form as the wicked tyrant and Jeremy Irons, playing the boy's wise mentor, is visibly thinking about his fee.

A painful reminder of what fantasy cinema was like before the Lord of the Rings trilogy re-wrote the rules.

The title of Hollywood's latest fantasy epic is simply the word 'dragon' with one letter changed, and unfortunately, that's about the level of creativity you can expect from Eragon.

It's a bonanza for the tinted contact lens industry.

This tale of dragons and derring-do risks sending kids and grownups alike drifting away to the Land Of Nod.

Kids too young for Lord Of The Rings may be distracted by this below average fantasy, but for everyone else this is derivative and silly.

Regardless of your feelings about the fantasy genre, there's one thing everyone can agree on: Elves should not be 5-foot-6.

As my companion dourly noted, "I just paid $30.00 to see Star Wars." (And yes, that's matinee pricing and all I had was a water.) But wow, great effects, seriously.

The viewer is not transported to the magical, complex and elaborate kingdom of Alagaësia of the book, but rather is merely observing action scene followed by action scene.

Director Stefan Fangmeier would have been better off following the cliff-hanging, lucidly written action scenes by [Christopher] Paolini.

I didn't hate this as much as everyone else. There's nothing new in the story or the filming, but it's all done well. It is weak when compared to "Lord of The Rings" or "The Hobbit", but it's much better than other fantasy films like Tom Cruise's "Legend". I personally found "Eragon" entertaining.

"I've got a great idea for a new movie now hobbits and shit are in vogue!" "Oh, yeah? What's it about?" "Well there's this young farmboy see, and he lives with his uncle...let's call him Duke Styporker. He can be played by some characterless pretty boy with an English accent, like that Hayden Christensen dude! EVERYBODY liked him...am I right or am I right?!" "Okaaaay...." "He finds out one day that he's the chosen one to hang out with this dragon who speaks to him!" "You mean like Dragonheart?" "No, no...nothing like that! That had that cool, charismatic Scottish guy voicing it. We'll just get a Satnav to do it and make her communicate through thought so we don't have to make its lips move...that oughtta save us a few bucks!" "I see..." "Then he can meet up with an ageing mentor who used to be like him, who teaches him how to fight and use magic powers. We could call it The Horce or something! But there's this bad ass Emper...er I mean King who wants him dead, so he calls in his right hand man who used to be a good guy like Obi Wan Kebabi (just thinking off the top of my head here!) but turned to the dark side!" "How did you get in here?" "This bad guy, called, um Garth Nader, captures a feisty princess who Duke has to rescue with the help of an enigmatic, morally ambiguous mercenary who keeps appearing to save his ass at the last minute!!" "Let me guess. Flan Polo?" "Now we're cooking! What a team!" "You ARE shitting me, right...?" "So they rescue the princess but his old mentor is killed by Garth...bet you never saw that one coming! So they all get together to help the rebels fight the imperial forces in a big battle in a Keep built into a mountain side!!" "Exactly like The Two Towers you mean..." "Erm...ever heard of it..." "SECURITY!"

I enjoy a good fantastical story but I had avoided this one due to the bad things I'd heard of it. However, I eventually thought I should still give it go and see for myself. Seriously though, I wish I'd listened to the naysayers now. Young farmer Eragon (Ed Speleers) finds a dragon's egg, and teams up with the newborn dragon, Saphira (voiced by Rachel Weisz), a former Dragon Rider (Jeremy Irons) and a female Elf (Sienna Guillory) to tackle an evil king (John Malkovich) and his shady accomplice (Robert Carlyle). Bad dialogue, bad acting, bad movie. If your going to release a fantasy film these days then make sure it has some mileage, as "The Lord of the Rings" has set a very high benchmark. This was also based on a series of books by Christopher Paolini but it's not even in the same league as some of the quality we've recently been spoiled with. Admittedly, I've never read the books, leaving me unsure as to how the adaptation should be but I do know this... the voice of the dragon was a bad move. It made no effort to even look like the dragon was communicating and just came across as cheap and insulting. Although some were impressed with the special effects, I didn't find them to be anything special. Speelers doesn't really cut it as the hero of the tale, lacking charisma and any form of acting ability and the rest of the cast seem perplexed. You get the impression from Irons and Malkovich that they know they've made a mistake with this one. The same goes for Carlyle but he still manages to deliver a decidedly nasty villian that's way above this nonsense. Normally a fantasy yarn has something to hold your interest - no matter how poor - but it just goes to show there are exceptions to that. This is one, and quite possibly the definitive to those exceptions. The only positive that can be taken from this is that due to it's box-office and critical failure, we will probably be spared the adaptations to the rest of the series. A very bad film indeed and one that I'd rather rate with zero, but I'll through a half a star Robert Carlyle's way.

Not as bad as it could be. Yet they did cut a lot out of the book. a love or hate series i like. Not as good as LOTR but a decent fantasy story.