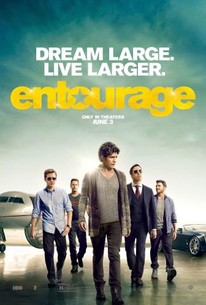 Critics Consensus: Entourage retains many elements of the HBO series, but feels less like a film than a particularly shallow, cameo-studded extended episode of the show.

Critics Consensus: Entourage retains many elements of the HBO series, but feels less like a film than a particularly shallow, cameo-studded extended episode of the show.

Critic Consensus: Entourage retains many elements of the HBO series, but feels less like a film than a particularly shallow, cameo-studded extended episode of the show.

Entourage," the much-anticipated big-screen version of the award-winning hit HBO series, reunites the show's original cast, led by Kevin Connolly, Adrian Grenier, Kevin Dillon, Jerry Ferrara and Jeremy Piven. Movie star Vincent Chase (Grenier), together with his boys, Eric (Connolly), Turtle (Ferrara) and Johnny (Dillon), are back...and back in business with super agent-turned-studio head Ari Gold (Piven). Some of their ambitions have changed, but the bond between them remains strong as they navigate the capricious and often cutthroat world of Hollywood. (C) WB

Emily Ratajkowski
as Herself

Mark Cuban
as Himself

Thierry Henry
as Himself

Tameka Harris
as Herself

Rob Gronkowski
as Himself

David Arquette
as Himself

Russell Wilson
as Himself

Gary Busey
as Himself

Baron Davis
as Himself

Bob Saget
as Himself

Jim Gray
as Himself

Clay Matthews
as Himself

Jon Favreau
as Himself

Shervin Pishevar
as Himself

Andrew Dice Clay
as Himself

Billy Dec
as Himself

Mike Tyson
as Himself

Pharrell Williams
as Himself

Scott Vener
as Himself

Liam Neeson
as Himself

Ed O'Neill
as Himself

Kelsey Grammer
as Himself

Chad Lowe
as Himself

Mark Wahlberg
as Himself

Henry Penzi
as Himself

David Spade
as Himself

Warren Buffet
as Himself

Jessica Alba
as Herself

Domenico Vacca
as Himself

Armie Hammer
as as Himself

David Faustino
as Himself

Tom Brady
as Himself

Michael S. Meldman
as Board Member

Steve Tisch
as Board Member

Matt Lauer
as Himself

Maria Menounos
as Herself

Terrence Jenkins
as Himself

Alyssa Miller
as Herself

George Takei
as Himself

Alan Purwin
as Pilot
View All

All a big-screen version does is help magnify how ironically un-cinematic the whole thing is.

True bromance is a beautiful thing. Alas, we're here to talk about Entourage.

Entourage is feeble, and the big screen magnifies its unselfconscious obnoxiousness.

In its own shameless, unreconstructed way, the film version is sometimes very funny. It is also crude and relentlessly chauvinistic.

This is so rank, such braying, witless drivel...

Epically vapid, but possibly in a self-knowing way which, alas, does little to make it feel like a better movie.

Entourage the movie is for the fans of the show. I don't really think someone new to these characters will enjoy them just as much.

Although Entourage works better as a TV series, it still manages to become feature film which is fun to be a part of, if nothing else.

The TV series was cheeky, witty, outrageous, over-the-top and entertaining. While the film has dashes of that, yet it feels like a haughty 104-minute-long episode with watered down wit and not enough Ari-isms.

It teases just enough Hollywood decadence, shows enough of the destructive force to artistic creativity and vision represented by the mercurial moneyed power trippers, to remind norms we might not want the movie star life.

Overlong and underwhelming, Entourage has gone from the show that ended too soon to the film that couldn't end soon enough.

The key here is the relationship between satire and vacuity in showbiz narratives. Entourage isn't critical of Hollywood; it's in awe of it.

Is this just an excuse to get these group of guys and some celebrity guests together? Of course. As a standalone film there is not much here, but as someone who watched the entire series it actually provides much more closure than the series finale did. There are a handful of funny moments, Jeremy Pivens is in fine form as always, but also a handful of pointless bits. I'd say it is definitely worth a watch for fans of the series, but if your not pretty familiar with the story than it is not worth your time.

I have never seen the HBO series (and don't intend to), but this silly (and rarely funny) movie was obviously conceived for fans only, with lots of celebrity cameos and characters who look terribly shallow - Ari being the exception, even overshadowing the protagonist, Vince, who is barely there.

All this is, is a 104 minute episode. That said, as a stand-alone episode, writer/director Doug Ellin has done such an excellent job of putting it all together for the big screen (with only a few loose ends, plot-wise) that it should rank up there as one of the best episodes since season 2. Now, what you personally think of these one-dimensional (misogynistic) characters is another thing. But if you came into this film expecting anything other than a film about privileged, good looking men, trying to get laid and make movies, then I feel bad for you. Read the rest of my review at: http://www.examiner.com/review/funnier-than-spy Follow me on Twitter @moviesmarkus