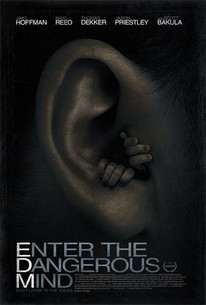 Enter the mind of Jim (Jake Hoffman) - a socially awkward EDM musician with a traumatic past, a tenuous grip on reality, and voices in his head. When he meets Wendy (Nikki Reed), he thinks he might finally have a shot at happiness. But as long-buried memories begin to stir and his crush turns into obsession, Jim finds himself looking into a violent abyss... and he won't be going alone. Pulsating with raw energy and an intense electronic soundtrack, Enter the Dangerous Mind is a pitch-black psychological thriller that doesn't let off the gas for a second as it twists to its shocking conclusion. (C) Official Site

Despite a novel pursuit for its troubled protagonist - he's a part-time composer of electronic dance music - the filmmakers, Youssef Delara and Victor Teran, fall back on some familiar beats.

A stalker thriller rife with the kind of details that the filmmakers might call "psychological" and that psychologists might call "insultingly stupid."

A searing, penetrating look inside schizophrenia is exactly what "Enter the Dangerous Mind" isn't.

Tonally all over the place, it's hard to determine what Enter The Dangerous Mind wants to be, and what it wants to achieve.

There's not much praise to find-not in the substance, nor the ambition, nor the writing, nor the cast.

[Enter the Dangerous Mind] lacks the depth and resonance required to keep it from being merely unpleasant.

The best thing to be said about the ludicrously titled Enter The Dangerous Mind is that it doesn't waste a lot of time bsing the audience.

The title of Youssef Delara and Victor Teran's new film pretty much sums up its shallow and exploitative take on mental illness.

Edited, like one of Jim's musical tracks, with a violent percussiveness, Snap builds to the explosive conclusion that its title promises while always treating mental illness with sympathy and sensitivity.

Its dialectic on the possibilities of change and cure, though bleakly resolved, brings method and meaning to all the madness - and while the film is full of jarring distortions and violent moodswings, it never hits a wrong note.

There are no featured reviews for Enter the Dangerous Mind at this time.