Enron: The Smartest Guys in the Room2005 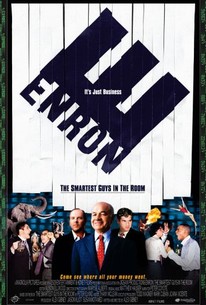 Critics Consensus: A concise, entertaining documentary about the spectacular failure of Enron.

Critics Consensus: A concise, entertaining documentary about the spectacular failure of Enron.

Critic Consensus: A concise, entertaining documentary about the spectacular failure of Enron.

Enron: The Smartest Guys in the Room Photos

Alex Gibney, who wrote and produced Eugene Jarecki's The Trials of Henry Kissinger, examines the rise and fall of an infamous corporate juggernaut in Enron: The Smartest Guys in the Room, which he wrote and directed. The film, based on the book by Fortune Magazine reporters Bethany McLean and Peter Elkind, opens with a reenactment of the suicide of Enron executive Cliff Baxter, then travels back in time, describing Enron chairman Kenneth Lay's humble beginnings as the son of a preacher, his ascent in the corporate world as an "apostle of deregulation," his fortuitous friendship with the Bush family, and the development of his business strategies in natural gas futures. The film points out that the culture of financial malfeasance at Enron was evident as far back as 1987, when Lay apparently encouraged the outrageous risk taking and profit skimming of two oil traders in Enron's Valhalla office because they were bringing a lot of money into the company. But it wasn't until eventual CEO Jeff Skilling arrived at Enron that the company's "aggressive accounting" philosophy truly took hold. The Smartest Guys in the Room explores the lengths to which the company went in order to appear incredibly profitable. Their win-at-all-costs strategy included suborning financial analysts with huge contracts for their firms, hiding debts by essentially having the company loan money to itself, and using California's deregulation of the electricity market to manipulate the state's energy supply. Gibney's film reveals how Lay, Skilling, and other execs managed to keep their riches, while thousands of lower-level employees saw their loyalty repaid with the loss of their jobs and their retirement funds. The filmmaker posits the Enron scandal not as an anomaly, but as a natural outgrowth of free-market capitalism.

News & Interviews for Enron: The Smartest Guys in the Room

Lion, Night of the Living Dead, The Salesman, and More on Netflix and Amazon Prime This Week

View All Enron: The Smartest Guys in the Room News

Critic Reviews for Enron: The Smartest Guys in the Room

Gibney's film never forgets the human side: the macho execs nearly killing themselves on boys' vacations with motorbikes, sky-diving and general risk-enhanced bonding; the suicide of one, the scapegoat imprisonment of another.

Audiences jeered and shouted at the screen in outrage. It has that kind of impact, without resorting to any of Michael Moore's below-the-belt tactics.

Alex Gibney takes a notorious tale of corporate greed and plays it as Greek tragedy, Texas-style.

Deft, entertaining and infuriating documentary about one of the most egregious cases of corporate corruption in American history.

A meticulously researched and ably handled chronicle of one of the largest corporate scandals in American history.

This thorough and thoroughly depressing account of the biggest corporate bankruptcy in history, and the rip-off that accompanied it, is so infuriating and dispiriting that your blood will boil, if not properly watered down.

... Enron: the smartest guys in the room pinpoints a moment when corporate morality was shredded like so many tonnes of incriminating documents in a big business run by small, small men.

This essential documentary skillfully maps out the shady "mark to market" accounting device that the men who called themselves "the smartest guys in the room" used to commit corporate fraud on a colossal scale.

A fun and demoralizing roller-coaster ride that will whet appetites for the Lay and Skilling debut in court as The Most Nervous Guys in the Room.

goes a long way to explain exactly why Enron imploded

The Emperor Has No Energy

Audience Reviews for Enron: The Smartest Guys in the Room

This documentary spins the tale of the nation's most disastrous failure of accounting standards and corporate greed in recent memory. The narration and visuals uniquely balance a straight presentation of the facts and an indictment of the scandal's main players. We get images of lurid strip clubs, where one of the Enron executives spent his billions of loot, and we also see sober, intelligent investigative reporters telling us about mark-to-market accounting and stock options. However, I think, by the end of the film, the balance tips in favor of pathos arguments, as the film attempts to get us more outraged. Also, the film hints at a broader social commentary, but I don't see this followed through. One "talking head" says, "[The Enron scandal] could happen again." I'm assuming this is even after Sarbanes-Oxley. Likewise, we're instructed by the film to get to know these characters, and by knowing them, perhaps we could see their hubris elsewhere. However, as I said, I don't see these themes explored with the depth they deserve. I want to hear people smarter than I explaining why Americans feel the obsessive need to compile what eventually amounts to Monopoly money. After all, it's virtually impossible to spend a hundred billion dollars in a lifetime, but we sure do try.

The Smartest Guys in the Room is a fascinating and well made documentary. It chronicles the rise and fall of Enron and it's corrupt leaders. It balances the serious situation with some humor well, making it an entertaining look at Enrons fall.

One of the better contemporary documentaries I've seen, this film is thorough but accessible, and it's on rock-solid footing, based on the book by journalist Bethany McLean as it is. Even if you're not well-acquainted with the business section of your daily newspaper, you will stay with this one until the end. Enron is a stunning story, and this doc captures it well. What the film does best is this: it answers its own questions. I watched it with my girlfriend, who might be the only person I know that's less business savvy than me, so we paused a few times to discuss. Every time we hit play, the film answered the question that we had just asked. A very conscious and worthwhile film.

A fast-paced examination of the fall of Enron, this film is certainly a well-made documentary that took me from having absolutely no knowledge to having a pretty good understanding of the greatest corporate scandal in American history. Highly recommended.

Enron: The Smartest Guys in the Room Quotes