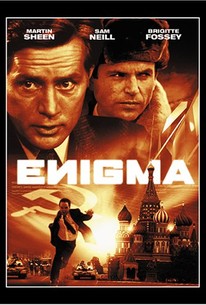 Directed by TV-anthology veteran Jeannot Szwarc, Enigma has a certain small-screen "feel" to it. Adopting a musical-comedy foreign accent, Martin Sheen plays Alex Holbeck, an Iron Curtain defector who returns to East Germany at the behest of the CIA. His mission is to save five political "undesirables" from the communists. Holbeck runs up against some formidable opposition, namely ambitious KGB agent Dimitri Vasilkov (Sam Neill) and a quintet of highly trained Soviet assassins. Brigitte Fossey co-stars as Holbeck's former love, whom he involves in his escape plans by asking her to romance the susceptible Vasilkov. ~ Hal Erickson, Rovi

There are no critic reviews yet for Enigma. Keep checking Rotten Tomatoes for updates!

There are no featured reviews for Enigma at this time.