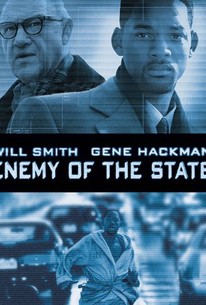 Enemy of the State Videos

Enemy of the State Photos

The action producing-directing team of Jerry Bruckheimer and Tony Scott is back with another thrill-a-minute ride called Enemy of the State. Taking its "innocent man accidentally caught up in political corruption" story from such films as Francis Ford Coppola's The Conversation, Alfred Hitchcock's The Man Who Knew Too Much, and Sydney Pollack's Three Days of the Condor, they turn up the high-tech volume in an attempt to create the ultimate action film. Robert Clayton Dean, played by Will Smith, is a devoted father, husband, and attorney shopping for a sexy gift for his wife. What he doesn't know is that he was given a videotape from a friend (Jason Lee) regarding the recent murder of a U.S. senator led by corrupt National Security Agency official Thomas Reynolds (Jon Voight). Now Reynolds is after Dean to cover his tracks or, as the audience soon finds out, frame Dean for Rachel's murder. Since Dean isn't up on his high-tech gadgetry, he needs the aid of ex-intelligence operative Brill (Gene Hackman). Between the explosions and chases is the subtext of George Orwell's 1984 mantra "beware of big brother," as Dean realizes that in the modern world, there is no such thing as total privacy. ~ Arthur Borman, Rovi

Will Smith
as Robert Clayton Dean

Rebecca Silva
as Marie the Nanny

John Capodice
as Older Worker No. 1

John Cenatiempo
as Young Mobster No. 1

Christopher B. Lawrence
as Paramedic

John Haynes Walker
as Fireman No. 1

Joseph Patrick Kelly
as Fireman No. 2

Warren Olney
as TV Anchor No. 1

Penny Griego
as TV Anchor No. 2

Mandy Kriss
as Reporter No. 1

Noel Werking
as Reporter No. 2

Sam De Crispino
as Reporter No. 3

Wayne A. Larrivey
as Doorman

Rhonda Overby
as Field Reporter No. 1

Brenna McDonough
as Field Reporter No. 3

Callison Slater
as Child No. 1

Colin Brodie
as Child No. 2

Joy Ehrlich
as Mom in Diner

Eric Olson
as Aide No. 1

Adam Karkowsky
as Aide No. 3

Robyn Killian
as Model No. 1

Laura Eizenia
as Model No. 2

Angelica Pamintuan
as Model No. 3

Vene Arcoraci
as Model No. 4

Charlie Curtis
as Model No. 5

Jason Welch
as Pintero's Kid No. 1

Joshua B. Ward
as Pintero's Kid No. 2

Robert A. O'Rourke
as FBI Observer No. 1

John Allendorfer
as FBI Observer No. 2

Henry Sandler
as FBI Observer No. 3

Chris Holt
as Himself
View All

News & Interviews for Enemy of the State

Sherlock Season 4, Master of None Season 2, Enemy of the State, and More on Netflix This Week
24 Times The Government Overspent Your Money (In Film & TV)
Total Recall: RT Celebrates the Bill of Rights

View All Enemy of the State News

Critic Reviews for Enemy of the State

[Its] spirited action is balanced by an almost contemplative attitude toward surveillance phobias and the movie cliches they've spawned.

Since Scott could not make this film snap, crackle or pop faster or more loudly, you might find the evening a bit light.

Hard to sit through.

From there, with the mystery entirely gone and the thrills fading fast, the rest is pretty much a two-hour chase sequence, culminating in a hilariously maladroit shoot-out.

What do you say about a movie that sends you home in a frenzy to search for bugs? In the new age of Big Brother, that's entertainment.

As a simple thriller that wants only to excite and intensify, it's one of the better ones that the late '90s produced.

Decent thriller; not suitable for kids.

If you want to believe in the dark side of government, we are already past the predictions of Enemy of the State.

Audience Reviews for Enemy of the State

As far as action are concerned, Enemy of the State is pure mindless popcorn flick from start to finish. The film has flaws, but it makes up for it with exciting action. I thought this film fun from start to finish, and with every other Tony Scott flick, he delivered a good action film. The cast do a fine job, and despite the fact that Enemy of the state relies on the traditional innocent man involved in political corruption explored in so many other films, this is still a must see film for action film buffs. The film is pure popcorn fare. What do you expect from a Tony Scott film? Will Smith is good as the lead and really delivers something memorable here. Tony Scott as usual delivers the thrills that you'd expect, and he does it well. Although this is far from perfect, Enemy of the State is a good action film for what it is. I was very much entertained, even though the film follows the usual formula of so many other films of this genre. The plot doesn't do anything new or original, thus it's kind of predictable. Despite this, Enemy of the State is still worth watching for a mindless, fun Friday evening. The cast make this film watchable and despite its flaws, this is purely a fun film that has awesome action. A very well done action film, not perfect, but good nonetheless. If you're looking for a good action film that is pure mindless fun, Enemy of the State is the film that you should watch. The cast are good, and the plot despite it's nothing original, it delivers on excitement, face paced action; and it does it well.

Not my idea of an enthralling movie, but okay for it's genre, I guess. I was too bored to tell for certain.

High adrenaline paranoia thriller making great use of the technological potential of the big brother state. While it slowly sets up Will Smith as the innocent man stumbling into this conspiracy, things speed up once his life is taken from him on a technological level. Music, camera work and editing all add up to a really exciting thriller that doesn't take many breaks for catching your breath. The showdown even brings a quantum Tarantino into the mix. The result is satisfying, fast, sometimes spectacular and surprisingly smart.

Will and Gene are excellent in this movie. Will's character's life is turned upside down when he is left with a video tape of a congressman's assassination. He doesn't know that he has the tape and is pursued by National Security Agents who use satellites to track him. Everyone around him is in danger. Great cast and plot.

Enemy of the State Quotes