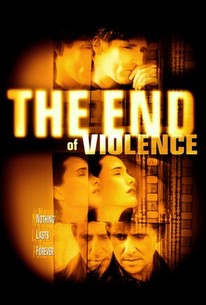 The End of Violence Photos

Wim Wenders is fascinated by the paradox that is Los Angeles. On one level, it is the stereotypical sun-drenched urban paradise characterized by a laid-back, everything-goes attitude, but on another plane it is a violent place where brutality is subtly celebrated -- and even promoted. The End of Violence centers on a diverse group of Angelenos whose lives interconnect after each is touched by violence. Mike Max (Bill Pullman) is one of Hollywood's more prominent directors of schlocky action movies. His films are among the bloodiest and cruelest in the business, and the moral implications of his business bother the money-hungry Max not a whit. He is so consumed with his business that he has little time for his increasingly frustrated wife Paige (Andie MacDowell). She plans to escape the situation by doing volunteer work in Guatemala. It is only after a gorgeous stunt woman named Cat (Traci Lind) is injured on the set that Max shows even the slightest compassion. The producer's life changes dramatically, however, after he is kidnapped by two inept but potentially dangerous hit men. Max escapes and goes into hiding at the home of his Mexican gardener and remains in seclusion there for over a month. Meanwhile, a police investigation to find Max is headed by detective Doc Block (Loren Dean). During his search, he encounters Cat and becomes fascinated by the beautiful girl -- who is secretly in contact with Max. In a parallel story, Ray Bering (Gabriel Byrne) runs a high-tech surveillance operation out of the Griffith Park observatory and with his assistant records daily events in the city. Sometimes he visits with his father (noted director Samuel Fuller), a retired military veteran. The FBI is after Bering's system and he is forced to go into hiding as well. In making this film, Wenders and screenwriter Nicholas Klein decided to explore their topic without exploiting it; thus it features very little actual violence and that which does occur, happens off screen.

Michael Massee
as Guy in Bar

Critic Reviews for The End of Violence

A longwinded exercise in pretentious confusion.

Skip the movie but buy the CD.

This goes on for two hours and two minutes. When I staggered out of the theater, I asked if Clinton was still president.

A meandering mess, a plodding dud.

Offers viewers opportunities to ponder a variety of diverse subjects, but its overall entertainment value is less than one might hope for.

A muddled, sentimental Euro-American hash, redeemed here and there from its fatal purposelessness by a few moments that remind us we're in the presence of a genuine cinematic visionary.

[Has] many potent moments.

A disjointed mess where a lot goes on but nothing happens.

Boring, incoherent and insultingly didactic. It's like Wenders has never been to America, never observed Americans and never even seen an American movie.

Wenders' observations and subtextual commentary about violence in American society are well-served by the nuances of Nicholas Klein's script.

Audience Reviews for The End of Violence

The End of Violence Quotes