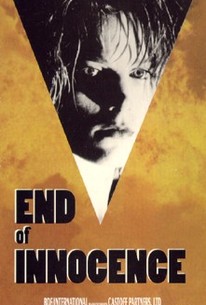 Actress Dyan Cannon, whose 1976 directorial debut Number One was nominated for a "best short subject" Academy Award, moves on to feature-length projects with The End of Innocence. In addition to directing, Ms. Cannon wrote the screenplay and played a leading role in this story of a young girl spiritually torn apart by forces beyond her control. Rebecca Schaeffer plays Stephanie Lewis, unwanted and ignored by her eternally squabbling parents. Mom and Dad do further damage to Stephanie's battered psyche by giving her mixed messages concerning sex and religion. The girl's self-esteem dwindles to microscopic proportions thanks to a series of no-good boyfriends. Suffering a nervous breakdown, she is placed in an asylum, where for the first time she treated as a human being rather than a nuisance by compassionate psychiatrist John Heard. Completed in the late 1980s, End of Innocence was released in 1990, one year after the death of star Rebecca Schaeffer.

Rebecca Schaeffer
as Stephanie at 18

James Terry
as Another Guy

Bill Moseley
as Man on the Hill

James Shanta
as Guy in the Park
View All

Critic Reviews for The End of Innocence

There are no featured reviews for The End of Innocence at this time.

The End of Innocence Quotes