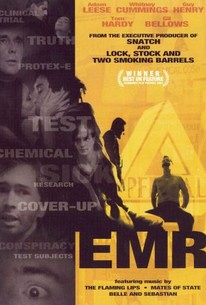 The low-budget indie feature EMR weaves several of the most notorious and oft-told urban myths into the narrative of a single thriller. It begins with Englishman Adam (Adam Leese) regaining full consciousness after a seizure - tens of thousands of miles from home - only to discover that someone has surgically extracted one of his kidneys. All roads lead to a shady drug company called Phenal, which Adam believes is plotting against him, systematically. As Adam's paranoia builds, he realizes that no one around him can be fully trusted. Gil Bellows, Guy Henry and Whitney Cummings co-star; newcomers James Erskine and Danny McCullough co-direct.

George Calil
as Agent No. 6

There are no critic reviews yet for EMR. Keep checking Rotten Tomatoes for updates!

There are no featured audience reviews yet. Click the link below to see what others say about EMR!