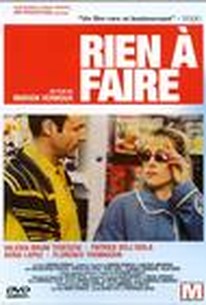 In this low-key drama from France, Marie (Valeria Bruni Tedeschi) has been laid off for over a year; depressed and with little to do, she drifts through the aisles of a supermarket, aimlessly doing her shopping. She bumps into Pierre (Patrick Dell'Isola); they strike up a conversation and she discovers that he worked for the same firm and was also let go, about a month ago. They keep running into each other at the market and strike up a friendship that grows into an affair. But Marie and Pierre are both married, and neither wants their spouses to know; this relationship has less to do with love than with a need to fill up the empty hours of the day and restore their damaged self-esteems. ~ Mark Deming, Rovi

There are no critic reviews yet for Rien à faire (Empty Days). Keep checking Rotten Tomatoes for updates!

There are no featured reviews for Rien à faire (Empty Days) at this time.