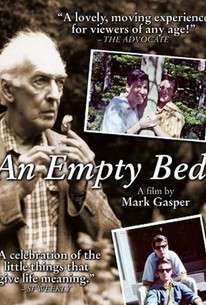 Empty Bed is a 60-minute character study of an ageing homosexual. Bill Frayne (John Wylie) sits alone in his room, contemplating his past, present and future. In flashback, the events of the last 24 hours are assessed, as he sifts through the personal contacts--both gay and straight--made during the day. Empty Bed was completed in 1988 and entered into festival competition, winning awards at Houston International Film Festival and Sinking Creek Film Festival. The film was released on a general basis in 1990.

Critic Reviews for An Empty Bed

There are no critic reviews yet for An Empty Bed. Keep checking Rotten Tomatoes for updates!

There are no featured reviews for An Empty Bed at this time.