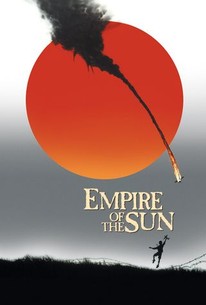 Critics Consensus: One of Steven Spielberg's most ambitious efforts of the 1980s, Empire of the Sun remains an underrated gem in the director's distinguished filmography.

Critics Consensus: One of Steven Spielberg's most ambitious efforts of the 1980s, Empire of the Sun remains an underrated gem in the director's distinguished filmography.

Critic Consensus: One of Steven Spielberg's most ambitious efforts of the 1980s, Empire of the Sun remains an underrated gem in the director's distinguished filmography.

Empire of the Sun Photos

Based on J.G. Ballard's autobiographical novel, Empire of the Sun stars Christian Bale as a spoiled young British boy, living with his wealthy family in pre-World War II Shanghai. During the Japanese invasion, Bale is separated from his parents. With the help of soldier-of-fortune John Malkovich, Bale learns to survive without a retinue of servants at his beck and call. By the time Malkovich and Bale are tossed into a Japanese prison camp, the boy has picked up enough street-smarts and developed enough intestinal fortitude to regard his imprisonment as an exciting adventure. The story ends during the 1945 liberation: on the verge of manhood, the 13-year-old Bale will never again be the pampered, privileged brat whom we met in the early scenes. ~ Hal Erickson, Rovi

Zhai nai She
as Yang

J.G. Ballard
as Guest at Costume Party
View All

News & Interviews for Empire of the Sun

View All Empire of the Sun News

Critic Reviews for Empire of the Sun

Empire of the Sun is a great, overwrought movie that leaves one wordless and worn out.

The pseudomystical vagueness that seems to be Spielberg's stock-in-trade stifles most of the particularity of the source.

The film's grave problem is a lack of central heating: We don't have a single character to warm up to.

This is derivative melodrama with Spielberg hedging his bets by ripping off his previous adventure films to lighten a story that cries out not to be turned into a comic book.

Empire of the Sun wants very badly to be a great film, though as Steven Spielberg really ought to know by now, wishing doesn't make it so.

Christian Bale gives a most remarkable performance as Jim.

[Empire of the Sun] has too much childish buoyancy to serve the disturbing historical events it's ostensibly based on.

Now considered a trial run for the more moving, horrifying and involving Schindler's List, Steven Spielberg's drama, set in China during the Second World War, is a glossy and rather tame affair.

The sun sets on this Empire without convincing us that either Jim or Spielberg has come any closer to growing up.

Empire of the Sun is a breathtaking movie in its scope and energy. It's just that, true to its childlike quality, this film is just a little too over-anxious to get its point across.

Spielberg knows how to tell a story and this one is worth telling.

Audience Reviews for Empire of the Sun

Perhaps the best Spielberg film ever, this war drama has a large cast but focuses on mainly one character, a boy out of his familiars. Malkevich plays an American, capitalism uncaged, for whom the war is primarily an opportunity for gain. Richardson is a British socialite, forced against her will to look at real life and none too happy about it. And Bale, the star, is a Brit of privilege too, but barely manages to make do. This piece had two things against it as I went in, Spielberg and Bale, but both rise above their comfort zones to deliver an exceptional story.

Empire of the Sun is anything if not an admirable effort. It's Spielberg's first serious take on war and what it can do to those it affects, so not really anything historic or even remotely about the war itself. The war is the background to the story, but the story is a bit uneven. I felt like the film was much longer than it needed to be to tell the story it was trying to tell... if its goal isn't what I think it is. My personal take on the ending of this film, one that I don't see many sharing, is that at the end, Christian Bale's character is so traumitized by the experience of being through a war on his own that he can't even recognize his own parents when they eventually find him again. He's not the same person, and he'll be changed forever. That's my take. Most people's take is that he's a boy who's learned to grow up the hard way. If the former is the case then the length is fine. If it's the latter, then it could have been shorter. Dragging it out with useless side characters and circumstances wouldn't do it justice if that is the case. Either way, as I said, it's an admirable effort, but one that doesn't seem to be achieving a clear goal in the storytelling.

Bravely sentimental movie. This is classic Spielberg. It drabs at the middle part of the film, but I enjoy and appreciate its wonderful value. A film that portrays the beauty of innocence.

Empire of the Sun Quotes