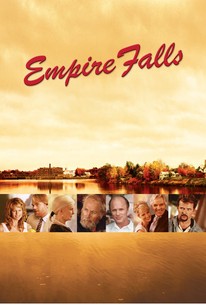 This two-part HBO miniseries is based on the Pulitzer Prize-winning novel by Richard Russo. Having long since sacrificed youthful ideals and values to remain in his New England hometown for the sake of his family, middle-aged Miles Roby (Ed Harris) finds his "secure" little world disintegrating when his wife, Janine (Helen Hunt), divorces him. Equally vexing is the emotional and financial pressure exerted by domineering town matriarch Francine Whiting (Joanne Woodward), who owns (among other things) the Empire Grill, the little diner that Ed has run for several years. As he reflects on what he considers to be a wasted life, Ed flashes back to memories of his curmudgeonly father, Max (Paul Newman, who also executive-produced the miniseries); his long-dead mother, Grace (Robin Wright Penn); his scapegrace brother, David (Aidan Quinn); his blossoming daughter "Tick" (Danielle Panabaker); and Francine's late husband, C.B. Whiting (Philip Seymour Hoffman). Also tied in with Miles's reminiscences is the spectacular saga of the rise and fall of Empire Falls, a once-prosperous mill town that has fallen into disrepair -- as have the town's once-rigid and inviolate social barriers. Despite the initial bleakness of Miles' plight, and the revelation of innumerable family skeletons as the plot progresses, the story is ultimately both heartwarming and life-affirming. Filmed on location in Maine, Empire Falls originally aired on May 28 and 29, 2005.

Doree A. Austin
as Mrs. Rodrigues

Michael Brockman
as Justice of the Peace

Harold Withee
as Waiter
View All

Cajoled through this landscape by a Thornton Wilder Our Town voice-over, we are too conscious of a series of well-bred calculations and well-done set pieces, as if Maine had been Merchant Ivory'd.

It's better on HBO where it can play over a couple of nights and you get a chance for the story. Because if you try to compress it into a hundred-minute movie, you'd lose all the rich textures at work here.

[Richard] Russo adapts his own novel for the HBO mini-series, which is essentially a four-hour film spread over two parts, and the format gives him the room to let the story and its characters live and breathe.

It is probably not that historical, but it is interesting to see this version of the current state of small-town Maine. The mill is empty and everyone has left. All there seems to be left is a diner, a pub and a church that needs painting. This movie is chalk full of name actors, and revolves around the life of Miles Roby (Ed Harris). The actors do a great job, and the story is laid out well (although the movie is four hours long). If you like plain stories of how people interact and deal with the life's trials and tribulations, you will like this movie.

By far, this is one of the best mini-series i've ever seen. It has a great cast, great story and a thematic quality to it. The idea to make the town more of a main character than any particular person is such an interesting way to go, it makes it feel like a Stephen King novel without any scary or supernatural elements to it. I feel like there was a complete story and non of the characters were not given a full treatment.

This film casted the leads solely based on star power. As such, the only non-phoned-in performances were from supporting players - Penn, Burton, Parsons, Farina - and young unknowns, Pucci as John Voss, and especially Danielle Panabaker as Tick. Terrible accents all around and what was with the lame Our Town-y narration?

[font=Century Gothic]"Empire Falls" starts with Miles Roby(Ed Harris), the manager of the Empire Grill in economically depressed Empire Falls, Maine(The town's main employer, the mills, closed years before), having just returned from his annual vacation in Martha's Vineyard with his daughter, Tick(Danielle Panabaker), only to find his ne'er-do-well father(Paul Newman) trying to hotwire his car. Miles' ex-wife, Janine(Helen Hunt), is about to marry Walt Comeau(Dennis Farina), the owner of a local fitness emporium. Miles has managed the restaurant for the last twenty-five years on behalf of Francine Whiting(Joanne Woodward) and assumes he will be granted ownership on the event of her death.(The Whiting family does not own Empire Falls, "only what is important.")[/font] [font=Century Gothic]An HBO miniseries, based on the novel by Richard Russo, "Empire Falls" is about living in a small town, especially one that is poor, and how it is especially hard to escape the past living there. A great cast including Robin Wright Penn and Philip Seymour Hoffman in the flashbacks and Theresa Russell playing a waitress do not stick out but instead lend authenticity to the material. The miniseries avoids giving in to sentimentality and quirkiness for most of its length but the climax is loudly contrived and it is ten minutes too long in mistakenly trying to wrap everything up too neatly. Despite its length and ambitions, it does not amount to much. [/font]