Embrace of the Vampire2013 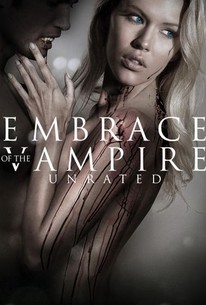 Embrace of the Vampire Photos

EMBRACE OF THE VAMPIRE (2013) stars Sharon Hinnendael as Charlotte, a timid and sheltered teen who has just left an all-girls Catholic school for a new life at a co-ed university. But an ancient evil has followed her here, tormenting her with disturbing nightmares and tempting her with forbidden desires. It is a hunger that can only be satiated by sensual pleasures of the flesh...and a thirst for blood. It's a battle for her soul... and one she's losing. But Charlotte is a fighter. The chaos and torment threatens to unleash her own inner beast, and anyone even close to her may find themselves embracing their own horrific fate. (c) Millenium

Kaniehtiio Horn
as Nicole
View All

Critic Reviews for Embrace of the Vampire

The film is caught in a spin-dry cycle where there's a ton of conflict (nightmares, school pressure, peer pressure) but no mounting action.

In spite of this clear connection with its namesake predecessor, Embrace of the Vampire actually more closely resembles a different film: 2010's ballet thriller Black Swan.

Sexy? Yes. As sexy as it thinks itself to be? Sadly, no.

Just look at the cast and walk quickly past the rental shelf...quickly...

Audience Reviews for Embrace of the Vampire

Could've been better. Jordan Ladd just about steals the show from Alyssa Milano, Martin Kemp is just horrible - no way, no how did I buy him as a vampire, and Harrison Pruett has the charisma of a chunk of wood. The 90's fashions are more entertaining than the story here, and though it started off okay, by the end it had totally lost me. I would imagine the only people who would actually like this would be those looking to see Alyssa Milano topless (and there is a lot of that on show here).

you know those saturday afternoons when a movie comes on and you think, "i have nothing better to do", so you watch it while youre doing things around the house? watching a wall would have been something better to do. one of the worst things ever made.

Worst bloodsucker movie with Alyssa Milano I ever watched.

Embrace of the Vampire Quotes